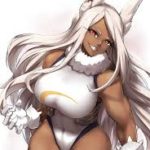 Rumi is tough and speaks her mind, even if it causes confrontation[4] and she respects those who do the same.[6] Rumi seems to believe that heroes who join teams are cowards, as they could just be relying on their teammates’ strength rather than their own.[4]

Rumi embraces life-threatening situations with a bright grin and is constantly searching for the next big adrenaline kick, smiling in the face of danger. She does not back down, even when she is overpowered by stronger enemies, claiming to only getting warmed up. Rumi also appears to take every day of her life with no regrets, admitting she’d risk her life for the greater good.[3]

Rumi is capable of enduring extreme pain without losing focus. She faces her own wounds reluctantly. She is pragmatic and quick thinking, as she binds off her bloodstream with her own thick hair, to keep fighting without her arm.[

Rumi has an athletic build with muscular arms and legs. She has dark skin, red eyes which are tilted slightly inwards, long eyelashes, and straight white hair reaching down past her waist. On her head, she has a pair of long white rabbit ears pointing upwards with a slight crook. Along with these, she also has a round white tail, which gives her overall design a definite resemblance to an albino rabbit.

Her hero costume consists of a sleeveless white leotard with dark purple trim around her shoulders and waist, a wide, yellow crescent moon design over her chest, and two thick metal plates on her midriff. She wears purple thigh-high boots to compliment her leotard, with more plating around the heel and toe areas, making her feet look like those of a rabbit. She also has a pair of thick white gloves on her hands with long cuffs, sporting small triangular protrusions around their edges.

During the Jaku General Hospital raid, her left forearm was crushed by a High-End Nomu and the tip of her right ear was sliced off though her arm was replaced with a robotic one on her other arm is several strange mystical blue markings. 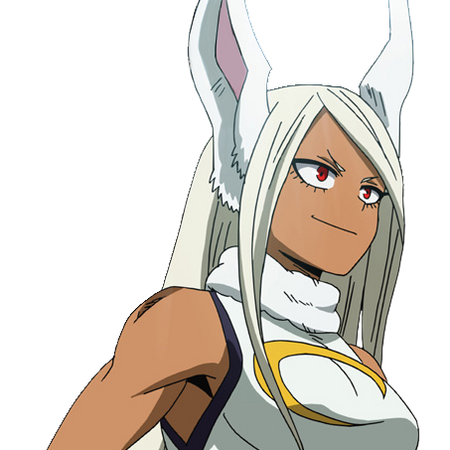 Overall Abilities: As the No. 5 Pro Hero, Rumi is more powerful than most other Pro Heroes. Her hearing capability is outstanding, as she was even able to locate her target though minimalistic noise. She was also shown to be capable of multitasking, as she simultaneously attacks, dodges, and concludes information about the enemies.[3] 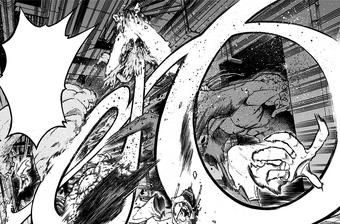 Rabbit (????, Usagi?): Rumi’s Quirk gives her the attributes and abilities of a rabbit. This grants her incredible leg strength, allowing her to jump and kick with extreme force; she can even destroy large chunks of the ground by thumping her foot. She also has excellent hearing thanks to her rabbit-like ears, and possess animal instincts that alert her to nearby danger.

Phasewalk is a Siren ability to bridge the gap between dimensions, allowing the Siren to teleport both herself and others across space-time. The ability can also inflict damage upon structures caused by small explosions when the Siren enters or exits phasewalk. It has a heavy connection to the fire element, allowing for flame-throwing and flaming wings to fly.

Phaselock is the ability to lock an object or person in place inside a blue bubble of force. It can also control the mind of phaselocked creature, making them turn on their allies temporarily. By the time of Borderlands 3, Maya has learnt to converge her power and launch it in the form of energy orb, strong enough to destroy metal gates. The power has also been used by Troy to infuse select Children of the Vault bandits with Eridium-infused power, creating the Anointed.

Phaseshift is technopathy, or the ability to intuitively manipulate technology or anything with an electric current and have said technology obey the phaseshifter’s commands and desires.

Phasetrance is an ability to manifest transparent parts of the human form which the Siren can use to affect the world around her. Known manifestations include six arms emanating from the Siren herself to defend, or a large fist, or series of fists, erupting from the ground or astral projection, being cast towards specific targets. These effects can cause damage in various ways, and in certain cases are also used to restrain targeted enemies.

The unnamed power of Tyreen Calypso. This ability allowed Tyreen to absorb the life energy of all living beings to increase her own power as well as any unique abilities her target possessed. She demonstrated the use of this ability when she stole Lilith’s Phasewalk ability and later when she absorbed The Destroyer, becoming one with it. Her brother, Troy Calypso also possessed a form of this power but was only able to absorb the power of Tyreen or other Sirens. This ability was previously possessed by the Siren Nyriad, who used it to complete the Great Vault by draining the entire Eridian civilization’s energy into herself.

Phaseleech is unique in a way that a Siren with this power cannot charge a Vault Key as it only draws power out of it. A Phaseleech user can also consume large amounts of Eridium continuously without dealing with withdrawal syndrome.