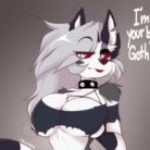 Cynical and choleric, Loona generally has no interest in matters that are going on around her. Loona is rude and apathetic toward her colleagues, particularly Moxxie, though her ire seems otherwise indiscriminate. When not looking at her phone, Loona is giving a hateful glare to anyone in view.

She is incredibly undisciplined and doesn’t have much of a work ethic. Among her known behavioral issue, Loona has been known to drink to the point of hangover before work and having unprotected sex to the point of contracting syphilis. She is also very apathetic to the suffering of others, as seen on the occasion where Millie called into the office for help after being stabbed only to be hung up on by Loona. Additionally, she was also shown taking pictures with her phone of the deceased Eddie when he was being beaten by Blitzo, Millie, and Moxxie.

Loona also displays an extremely short temper combined with emotional instability. Upon being questioned about something as simple as why she was eating Moxxie’s lunch, Loona sprinted out of the office and assaulted an innocent bystander to vent her frustrations. This is particularly egregious, given the bystander in question was a baby in a carriage which Loona punted out of sight.

Despite this, Loona shows a somewhat friendlier attitude towards Blitzo, as he enables her actions, and at times when he defends her, she smiles and agrees to his defense. She is also shown to appreciate Blitzo’s sense of humor, especially if it’s at Moxxie’s expense since she was seen stifling a laugh when the former made a joke of the latter’s dick

Loona is a wolf-like hellhound. She has a dog-like muzzle with pointy teeth and a dark grey nose, red sclera with white irises, white fur with grey patches on her shoulders, a big bushy tail and voluminous grey hair swept to the side to reveal her ear.

Her outfit features a black choker that has white spikes. Her grey crop top has strings shaped like a star to resemble a pentagram to hold it up. Loona wears fingerless gloves and shorts with a crescent moon cut on the right side. She also wears black toeless stockings and is barefoot, due to her digitigrade stance. She has a piercing on her right eyebrow and two piercings in her left ear. 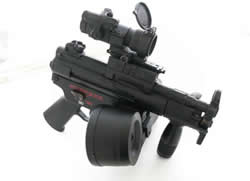 She has two suits one’s lightly armored and built for speed and the other one is more heavily armored.

Oh please I don't care about some religion or politics bullshit I mean it's a waste of time.