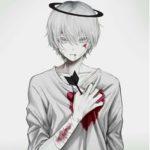 EXTRA DETAIL: He has a trench coat which is basicly an armoury, it has a never ending  supply of guns and stuff. he can never die unless he wishes. he has a hidden tattoo that only appears on his male form, the tattoo is an upside down cross on fire, it is on the center of his back.

EXTRA DETAIL: she has white hair that goes down her waist, she has a black rose tattooed on her chest, she can draw really good and sing like an angel.

The 'Dead' Brother of Ash WildFlame

The ‘dead’ brother of Ash WildFlame, he was revived with a will to protect, he was murdered by a bunch of people (i shall not say)

Get out of my Head!

Even after death, Emotions are Achieved