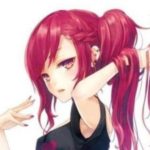 Control over Ash and fire

Ichika has always been a rebel she never took to following rules. The powers she was born with did not help her case. Her powers are control over fire for offence and for defense she can turn parts of her body into ash. Her family encouraged her unruly behavior they to were rebels and Petty criminals. Growing up she leaned how to steal at a very young age never taking more than she needed. She would skip most classes and even the ones she did go to she never paid any attention. No but she did enjoy fighting every other day she could be seen fighting. Most of her teachers have given up on her seeing her as a lost cause. She has never been good at choosing the right girl friends or boy friends most of not all of them end in a major fight that involves the police. So all in all Ichika Yamamoto is a tough person to handle maybe one day that might change if she was to find the right person for her until then she will continue to be herself.

long red hair pulled back into a messy ponytail

two switchblades one is black while the other is white

My life is fun