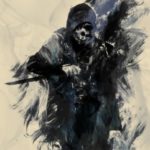 active 1 week, 3 days ago
Base

Somewhere near Vienna in the year of 1409, in the middle of the forest, laid a tiny village. It was made up mostly of hunters and fishermen, who sold the pelts and ate the meat. Then one day, early in the morning in the middle of a harsh winter, a baby boy was born. The son of a huntress and a merchant, the baby felt the cold upon his face. Until it was replaced by the warmth of his mothers love. He felt safe and secure in her arms. He felt love. Real love. He did not get such love from his father however, who had already left in search of profit and prostitutes. As the boy grew, his mother taught him how to hunt and fish, but also love and mercy. As he grew even older, he began to hunt on his own, bringing home rabbits and other small animals. But he saw his fellow children bring home huge stags, so the boy pushed himself to do better. And he did, bringing home even bigger stags. As he grew into a young teen, he began to devote his life to the woods. He spent days in the forest, hunting and exploring. He wanted to leave his village and live in the woods, but he didn’t want to leave his mother. So he always came back, embracing her love and comfort. But one fateful day, as he was returning from a long hunting trip, instead of being greeted with the warmth of his mother, he was greeted with the warmth of flames burning down his village. He stood there and watched as bandits razed and plundered his village, killing anyone they saw, which included his mother. After the bandits left, laughing and dancing while doing so, he ran up to the body of his mother. She was no longer warm, but cold. Tears rolled down his face as snow began to fall, little flakes hitting his face. He ran into his burning home, grabbing his mothers bow and running out. He took one last look at his mother. For one last time, he felt a hint of warmth. For one last time, he was at peace. Then he left the village, not as a boy, but as a man. The man’s name was Ronald. Ronald Destuh. He was a man full of anger, sadness and confusion. A man hellbent on one thing. Finding the bandits, and finishing what they started. He tracked them down to a river bed, where they drank and feasted. It was early morning in the middle of a harsh winter. Ronald felt the cold upon his face as he aimed his mother’s bow at the head of a bandit. About 10 seconds later, all of the bandits laid dead, struck by arrows. Ronald sat upon a rock, taking in everything that had just happened. He thought he would feel happy and warm, but he still felt cold. Killing the bandits changed nothing. So, he left the camp, no longer a man, but a monster. A monster who felt nothing when he killed. He bought a mask to hide his humanity. He became a assassin for hire, taking contracts and killing many people. He saw himself as a monster, and many people thought the same. But some people like monsters, because he was recruited into a guild known only as the Brotherhood. It was led by 7 men who called themselves the Elders. They gave Ronald a home and a purpose. A purpose to kill. They also gave him magic. Magic to traverse the realms and universes, killing different targets. So Ronald does. He hates it, and he hates the Elders, but it’s all he knows. For now, he’ll keep doing the Elders dirty work, hoping to feel warmth once again.

He stands at 6 feet with a muscular build. His light blue eyes are hidden by his silver mask, which is in the shape of a skull. His somewhat curly brown hair is hidden by a black hood. His feet are protected by black riding boots, which are dirty. He wears black old pants, along with a dirty and torn black shirt. He wears a assassins robe, which is also rather dirty and torn.

A quiver of arrows, his mothers bow and his dagger.

You don’t need to know them.

There is no such thing as innocence, just varying degrees of guilt.