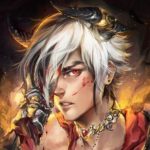 “Do not scorn a weak cub. He may become a brutal tiger.”  – Old Mongolian proverb

Imp Powers:
Absolute Buying. The user can buy or barter for absolutely anything, including people, concepts, elements of reality, etc.

Animal Morphing. The user can transform into a raven, a rat or a spider.

Contract Bestowal. The user can bind someone into an agreement with an Infernal Contract.

Enhanced Durability. The user is resistant to non-magical physical attacks.

Fire Immunity. The user is immune to harm by fire or heat.

Goodness Sense. The user can identify goodness in oneself or others.

Horn Protrusion. The user has a pair of horns on his head. Aren’t they cute?

Invisibility. The user can turn invisible until he attacks or his concentration is broken. Any equipment he carries or wears turns invisible with him.

Magic Resistance. The user is resistant to the negative effects of magical attacks.

Poison Immunity. The user is immune to poison.

Prehensile Tail. The user’s tail can be used as an extra limb.

Psychic Communication. The user can commune with his master.

Reliant Immortality. The user can only truly die if his soul is destroyed within the Nine Hells of Baator.

Semi-Immortality. The user does not age.

Stinger Protrusion. The user’s tail is equipped with a poisonous stinger.

Supernatural Vision. The user can see even through magical darkness.

Tail Manifestation. The user has a tail.

Wing Manifestation. The user has wings with which he can fly.

High-Speed Flight. The user can fly at great speeds. Scales with Condition powers.

Needle Protrusion. The user has tail spines that regrow naturally.

Pyrokinetic Needle Projection. The user can hurl his tail spines, which burn on contact.

Telepathic Speaking. The user can speak aloud using only his mind.

Telepathic Translation. The user can communicate in any language using his mind.

Merregon Powers:
Enhanced Combat. The user is unbelievably skilled in most forms of fighting.

Fearlessness. As long as he is in the presence of allies, the user cannot feel fear.

Power Borrowing. The user may gain the mental defenses, strength, durability, speed, and skill of a willing creature for as long as they are within sight of the user.

Power Sharing. The user may share his mental defenses, strength, durability, speed, and skill with any number willing creatures for as long as they are within sight of the user.

Blood Magic. The user has the inherent power in their blood to manipulate and/or fuel spell-casting.

Curse Inducement. The user can place curses on whatever they wish – people, places, objects, etc.). The exact effects can be nearly anything the user desires, ranging from minor annoyances to tortuously extended death.

Death Magic. The users of this power can utilize powerful spells which can cause any living thing to die, either instantly or eventually.

Destruction Magic. The user of this power can utilize powerful and yet very dangerous spells which can unleash unstable magical energies which can destroy entities, and other powers.

Elemental Magic. The user can utilize different elements as a form of magic. They can use different spells to formulate their elemental quantities and energies for many uses.

Enhanced Strength. The user’s strength is greater than that of a normal member of their species.

Illusion-Casting. The user can employ illusions.

Necromancy. The user can manipulate the dead, death, the death-force and souls. Users can also communicate with the deceased – either by summoning their spirit as an apparition or raising them bodily – for the purpose of divination, imparting the means to foretell future events or discover hidden knowledge.

Possession. The user can possess or take over the body of any living being, whether sentient or not, by stealing their motor functions and senses.

Psychometry. The user is able to perceive the condition of subjects from the past or present by touching them.

Ritual Magic. The user is able to create and perform rituals that can have different and yet powerful effects.

Shapeshifting (Arm Only). The Dark Arm can shapeshift its form, whether to change its material composition or weaponize itself.

Sympathetic Magic. The user can link the essence of a person or object to a model, which can then serve as a proxy to affect the genuine articles.

Telekinesis (Basic Level). The user can manipulate objects with their mind.

Fire Bolt Projection. The user can create and hurl bolts of fire.

Spike Protrusion. The user can grow spikes from any part of his body.

Whenever I'm alone, a tiefling barbarian occupies my thoughts.

We're linked, she and I, by contract and love.

With a name like Nick Shadow, you’d think I’d be someone important, right? The son of some archdevil, living it up in a big ol’ castle in one of the less hellish places in the Hells?

I’m actually just an imp servant. When the local archdevil brains some poor schmuck and throws that carcass onto the rug, I’m the one scrubbing out the stains. The archdevil decides he doesn’t want all of his intestine noodles? I’m doing the extra dishes… can’t even eat the leftovers. I’ve become a master of trident-ducking, which is something every imp has to get good at real fast if they want to survive one day beneath an archdevil’s wrathful command.

So why do I do it, you ask? Why do I continue being a servant in the Nine Hells?

I don’t. I packed my bags, flipped ’em off, and left for a better world. Instead, I wound up on Hellifyno. Just my luck; my magic is terribly low-level, and I’m no warrior. Looks like it’s just me, my wits and my cleaning services versus this crazy planet. Wish me luck.

Well, so it used to be. I’m not alone anymore.

Blond hair, pointed ears, aqua-blue eyes and ringed horns. I’ve gotten rid of my old servant’s uniform; these days, I wear whatever I like. My attire changes along with my forms (by necessity, so the clothes don’t sag or tear). The end of my tail isn’t heart-shaped anymore, but I like to think it still looks cute. And the spines don’t come out unless I’m unhappy, honest! 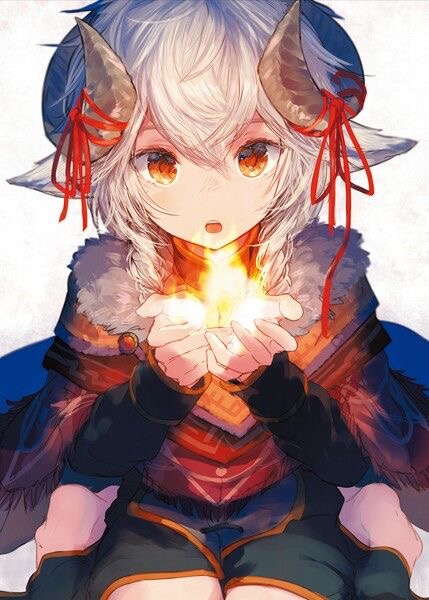 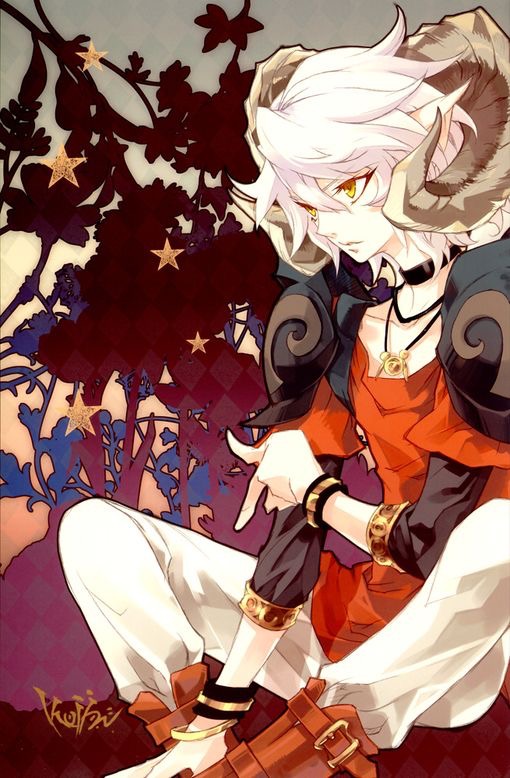 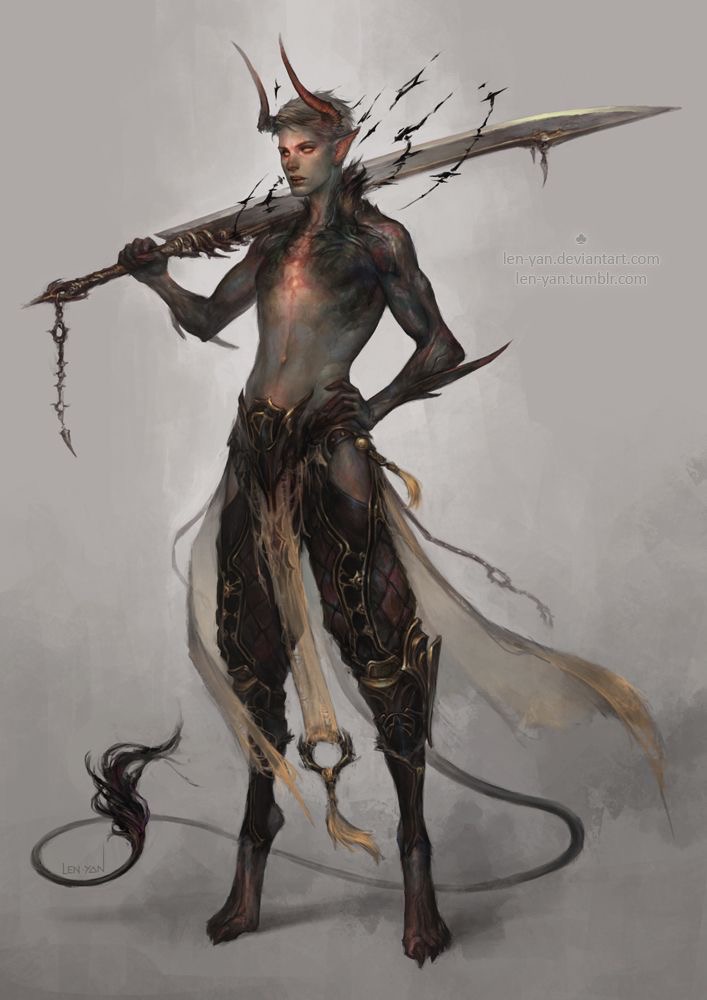 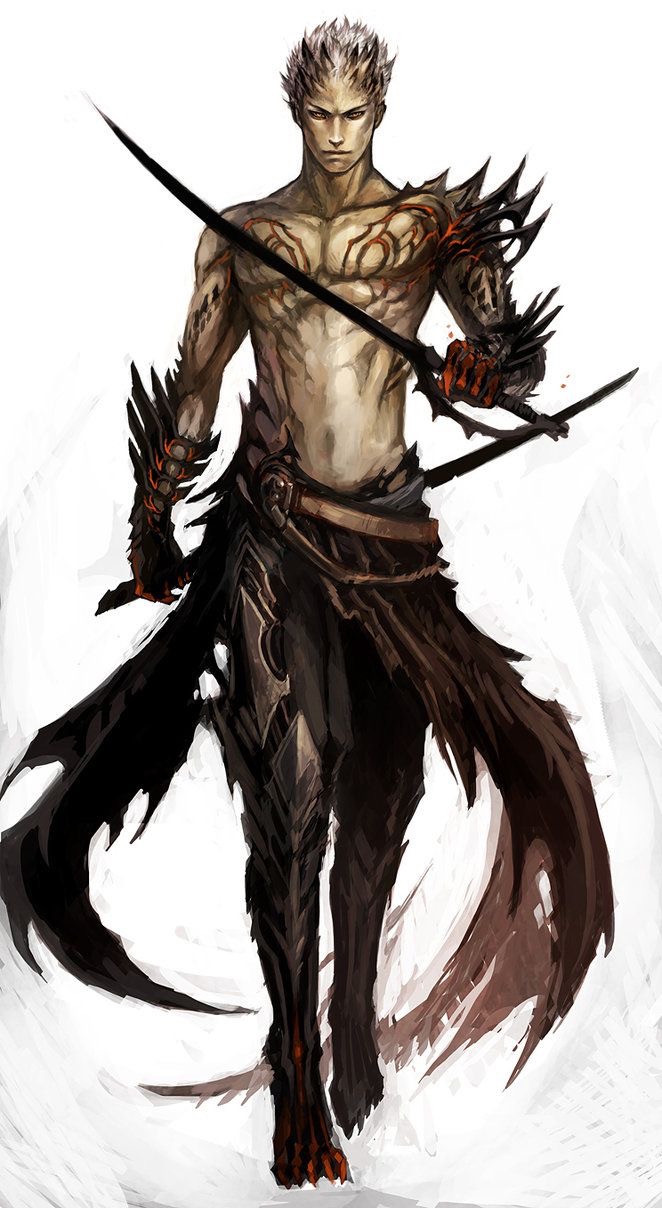 Hell’s Bells: Nick can use these to travel back and forth from the Nine Hells to Hellifyno.

Familiar Contract: Nick can enter into a contract to serve another creature as a familiar, forming a telepathic bond with his willing master. While the two are bonded, the master can sense what the imp senses as long as they are within one mile of each other. While Nick is within ten feet of his master, the master shares his magic resistance trait. If his master violates the terms of the contract, Nick can end his service as a familiar, ending the telepathic bond.

– Nick has entered into a familiar contract with Anivari.

My true name, which no one but her will ever know.

in my ability to do my job!