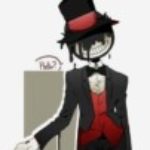 “wandering is a sin”

Bendy is a cartoon character created by Joey Drew Studios as their mascot in the very late 1920s. He is as well the titular character of the Bendy franchise, being its namesake. The studio’s flagship character, Bendy starred in a series of cartoons thirty years prior to the events of the first game, often alongside the studio’s other characters such as Boris the Wolf and Alice Angel. Bendy is also hired in Briar Label Bacon Soup products as an endorsing spokestoon.

General Description
Creation
Bendy was created in 1929 by Henry Stein, but the record book of Joey Drew Studios states that Joey Drew was the person who created him a few years later he met a black furred male cat with green eyes named Mao Mao.. after a few months they started to love each other dearly..

Physical Appearance
Bendy is a cartoon demon-like imp character with his appearance entirely colored in black apart from his face, which is white in color. He wears shiny black shoes, a white bowtie, and a pair of gloves that closely resemble those of other cartoon characters like Mickey Mouse, each possessing two black buttons. The shape of his head resembles cartoonish horns that always remain facing the viewer no matter which way Bendy is facing. Because he lacks a neck, his head floats a few inches away from his body.

Bendy has a most notable wide, toothy grin, showing eight teeth when he’s grinning fully. His alleged “invisible eyebrows” from above his large pie eyes can even move when expressing his emotions. In terms of his height, Bendy appears to be short, being easily towered over by Boris.

Personality
A playful little fellow, Bendy can get up to some naughty antics when left to his own devices.
JOEY DREW STUDIOS EMPLOYEE HANDBOOK[1]
As seen in our animated cartoons, Bendy is mischievous and full of fun. He likes to get people’s attention and he’ll stop at nothing to make sure he has it.
JOEY DREW STUDIOS EMPLOYEE HANDBOOK[2]
Bendy is a borderline troublemaker, but rather impatient and easily startled or timid, yet justifiably cheerful, fun-loving, and mischievous as his devilish nature would imply. Bendy often refuses to pay for anything he buys, as he tries to take his burger without paying Charley in “Tasty Trio Troubles” and didn’t pay Gaskette for his ride according to the latter’s bio image. According to Joey Drew Studios Employee Handbook, while Bendy can be playful he is not evil and his jokes are never mean-spirited. Bendy is also attention-seeking and easily distracted; he is never hardworking or courageous

He has various forms:

His body is basically a weapon..

He likes to wear a tutu