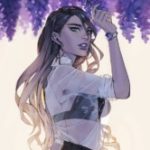 Current Location: Los Angeles, California, Earth (this can be changed depending on the rp style!!!!!!!)

Education: Iris graduated high school at a younger age than most. At sixteen, her very rich mother and stepfather paid for a prestigious school on the eastern seaboard. She graduated after earning her masters degree and immediately thought of how she could start a business.

Occupation: Before being turned Iris was the CEO of a major marketing company in New York City. She had this job for at least three years before being turned. Now she is a photographer out In Los Angeles trying to earn a living.

Family: (in order from living to dead)

Jackson: Younger brother, who knows of her ‘secret affliction’ (alive)

Michael: real father who has never even met Iris (unknown)

Eli: Iris’s stepfather, real father to Kayci and Jackson, who knows of her affliction and helps as best he can. He’s also loaded (alive)

Personality: Iris has always been a hardworking, ambitious woman, with high hopes and big dreams of one day becoming rich, and able to support a family. Even after being turned, and figuring out how to deal with it, she still wanted a family. But how can you have a family when you might kill them? Iris constantly puts herself down because of her inner wolf and it had put her career, and her life on hold.

Single (looking for a mate)

Iris was twenty six when she was bitten. She had just scored a deal with another company, and had decided to stay for the party afterwards. By the time is was over, it was almost three in the morning, raining, and no taxi’s were out. “Okay, I’ll just walk,” she had said in dejection, at the curb. She rolled her eyes, her hair slowly soaking to her face, clinging wetly to her forehead and cheeks, and she began to make her way down the sidewalk. Ten minutes into her walk, she heard footsteps behind her. But every time she looked back, noone was there. Until, the fourth time she looked back, she noticed a dog. A really, really big dog. It looked feral, and its eyes were a orange color. Iris tensed before she began walking backwards, not trusting the dog enough to let it out of her sight. Finally reaching her apartment, she fumbled for the call button, and as soon as she was buzzed in, she swiftly whirled inside, shutting the door and closing her eyes while panting. When she opened them, the dog was right there. It was raised on its paws, yellowing teeth bared in a harsh snarl, and its orange eyes trained on her. Its fur was a tawny color. Like a mountain lion, and the closer she looked the more she realized it wasnt a dog. It was a wolf. Screaming she smacked the crate on the apartment door, and fell to her butt. She began to scramble away, eyes on the beast in horror before turning and racing up the stairs.

That night when she lay in bed, supposed to be sleeping, she could hear the click of  claws on her hardwood floors. She was frozen, eyes clenched tight and prayed she was only dreaming. She knew she wasnt when she opened her eyes, and the wolf loomed over her….

When she awoke, she was on the shore of long island sound, she was naked, hungry, and bruised. She could barely move. And when the wold who turned her stepped from the water, long hair trailing down her back, and over her dark skin, she felt confused. Over time the women named Kalika showed her how to control her inner wolf. And for the first time, Iris belonged. Kalika had a pack of four others. Meeko, a smaller male wolf, with sun colored fur and white markings.

Kane, a beautiful male wolf, the alpha, with fiery red fur who sent Kalika after a mate (Iris)

And finally Matthias, a black furred wolf with a mean streak.

All except Matthias accepted Iris as Kalika’s mate. And soon, Matthias challenged Kane as Pack leader. Kane, after losing told Iris that if her and Kalika wanted to live peacefully, Iris must challenge Matthias. And she did, but lost. Matthias banned Iris from the pack, and killed Kalika.

Iris ran, and she never looked back. Now the woman lives in Los Angeles as a photographer, making tons of money and living peacefully. But still her inner wolf longs for another Kalika. Will she ever be mated again?

Hair type: straight, black at her roots getting lighter as it flows

Usual dress: a  see through button down, showing off her black bra underneath, and a short, A-line skirt, with black heeled pumps.