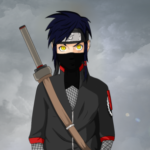 wouldn't you love to know?

ash Uchiha was born in the top class of the Uchiha trained since he could hold a sword he trained day after day after day his parents forced him to do so. one day he was going to the training site when he saw a man dressed in black clothing that man took out his entire clan that was there while he was training his dad managed to get to ash and say “we have hidden this for so long but you are the 2 tails host ” *ashes eyes would have widened as the man appeared cutting his fathers throat then disappearing leaving ash alone* (he is also part of most clans ash was really a weapon created by Orochimaru

kunai, scrolls, various other ninja tools Murasaki Sharingan (????, Murasaki Sharingan), (???????, Mangeky? Murasaki Sharingan) are D?jutsu awakened by Haruto Senju during great frustration because by the fact that his siotra from birth better than him even inherited both kekkei genkai parents (Byakugan, Wood Release). In contrast, the form of Mangeky? woke up when his family was killed before his eyes by shinobi deserters.  Shimasu Sharingan (???????) is a rare Kekkei Genka only found in people who are from both from the Uchiha and Yoshikazu Clan.. The Shimasu Sharingan is an mixture of the Sharingan and the Kyushugan. The ability is a mix between the powers of both of the kekkei genkai, it allows the user to absorb any attack and copy it.

i will become the strongest ninja to ever live!