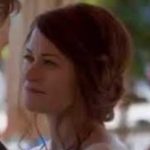 Hello; My name is Belle. I live in a small kingdom outside the Enchanted Forest. I am the daughter of Maurice and Colette. My mother died when I was young in the second ogre war. As time went on; I became a maid to Rumplestiltskin. I began to discover his flaws; and we fell in love; However things didn’t go well as planned. Rumple flipped and I was released. He was afraid to love. After my escape; I was taken away by the Evil Queen and hidden in an insane Asylum,

Years later I was released and I was reunited with Rumplestiltskin and I moved in with him; More years went on and I had a child with him we named him Gideon he’s all grown up now. I’m the great grandmother to Henry Mills. I love my life here in Storybrooke. I wouldn’t trade it for the world.

Long brunette curly hair usually tied up with an elastic or ribbon. I wear jeans and a white blouse sometimes a blue dress as well and heals or flats.

Fairytales; and romance and believing that there is good in everyone !