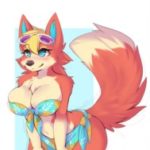 House
In New Horizons, Audie’s house is light blue with a white latticework door and an orange thatch roof. The interior has the tropical vista wall and the blue floral flooring. She has a green diner neon sign, a natural palm-tree lamp, a light brown rattan low table and rattan end table. She also has a silver double-door fridge, open-frame kitchen, yellow kitchen mat, blue menu chalkboard, and a fruit basket sitting upon an orange-themed cardboard box. Additionally, she has coconut juice and a tape deck that plays K.K. Island. A white wall fan hangs on the wall. When Audie crafts a recipe, she uses the birch ironwood DIY workbench.

Audie is a wolf villager with orange fur, likely meant to seem similar to a fox. This is also hinted at with her initial phrase, which is “foxtrot”. She has yellow hair in a tuft and wears yellow eyeshadow with winged eye-liner. She has a pair of white sunglasses placed in front of her ears. She seems to take a tropical theme, as shown by her sunglasses, Tropical Muumuu tee, and overall bright appearance. Due to her makeup, she may be mistaken for a snooty villager. She also looks very similar to a Japanese Gyaru, a type of fashion where girls tan their skin, making it look orange, and bleach their hair.