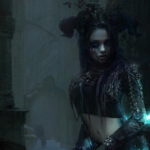 Alias: She doesn’t have one

Eyes: A bright emerald-green, marked with speckles of vivid amber

The Sun glyph above is tattooed on the back of her left hand.

The Moon glyph above is tattooed on the back of her right hand.

The Goddess glyph tattoo is located on the (center) palm of her left hand.

The God glyph is located on the (center) palm of her right hand.

This symbol is a representation of balance, tattooed on the center of her stomach.

The season glyphs run down along her spine, starting with spring, then summer, autumn and then winter.

And the four seasons altogether; The Cycle

The wolf symbolizes the moon god, tattooed on her right ankle.

The lion symbolizes the sun goddess, tattooed on her left ankle.

This other sun marking is tattooed along a large portion of her left thigh, just barely ending at her knee.

This other moon marking is tattooed along a large portion of her right thigh, just barely ending at her knee.

This fire symbol is tattooed and curls around the cnemis of her left leg.

This water symbol is tattooed and curls around the cnemis of her right leg.

Lastly, this tribal marking represents family and blood (for Anikara and her tribe). It is tattooed on the center-base of her throat.

Two of these jade (the stone) bands are bound to her wrists.

Mitsuko, the goddess of the Sun.

Amaris, the god of the Moon.

Nestled within the hidden and winding paths of the forest, a remote and unknown tribe lay within their oasis where they based a religion and life upon the sibling celestials, the guardians of the sky, child of light and child of dark, bringers of balance.

Once, the Balanced walked upon the land. Beings of exoctic and strange beauty. Mitsuko with her glimmering skin of bronze, freckled and smooth. Locks of gold curling wildly about striking features, gaze of deep brown struck with speckles of honey-gold.

Amaris with his pale and flawless skin, of which sparkled with faint tints of silver and blue. Waves of ivory tumbling about his head, eyes of cerulean holding a sheen over them, giving that gaze a cloudy look about it.

Fire and Water, they were. Destruction and Creation. A perfect mix, balance. One’s blood tainted with the burning of flames whilst the other’s flowed with the cool of water’s waves.

While one small crowd thought themselves to be blessed by their company, soon to run off in their rage and become a tribe that would be known as The Jade, the rest of the village was suspicious and fearful of the new being’s presence within their small land. And so, with paranoia, uncertainty and anger encouraging their actions, they ventured off into the forest in which they had seen the siblings sneak off to so many times.

The villagers hid, tucked away in the forks of tree branches and concealed behind the leaves. Awaiting for the odd duo to creep into the wood.

It had taken some time, and some of those within the group had hissed pleads to return. Panicked that the two had known of their plans and were striking them with a curse of destruction upon their home and lives.

But, then, laughter ran out and naked feet were heard thudding against the earth. The silver-haired man ducking down to avoid low hanging branches, his sister right at his heels. Their voices hushed as they spoke.

The hidden villagers could only watch in horrified silence as the unwanted duo began their dance.

Amaris stepped forth into the gently flowing river, eyes fluttering closed as a smile drew over his lips. Mitsuko grinned, lips soon parting into laughter. A hand was thrust forwards, and as she drew it out in a line, flames began to lick up at the forest floor.

The group began to murmur amongst themselves in fearful whispers, watching as the fire got nearer and nearer, and began to lap at the roots of the trees they took cover within.

Amaris gathered his arms together, hands dipping into the depths of chilling water. The man tipped his head upwards, and a wave surged forth, crashing over the land and hushing crackling flames into a sizzling mess of ash and mud.

Relieved, but still in anger, rage and fear, the villager’s came to make a decision..

One night, while the young beings ventured through the forests, a bustling crowd tore through the treeline. Hissing insults and shouting cruel words, tossing them towards the siblings whom thrashed and writhed within the grip of strong hands. The villagers held Mitsuko back, thrusting her forth and extending her up towards the beaming sunlight, who screamed in a fury and panic. She tried to burn the bodies holding her, dispersing their lives to nothing but ash.

But, the pleasant boil that usually tinted her blood was shrouded, numbed. The witch of the town had cast a spell, depriving them of their harmful and destructive abilities, as the people had said.

The young woman could do nothing but to watch, curses spewing from her lips as she struggled within the grasps, screaming as her brother was dunked down within the river. The cool caress of the waters unable to be created, nor manipulated, to his control.

Soon, the water rippled and those who held Amaris found their grip to be met with the rocky ground beneath the water. Droplets arose, the silver-haired man’s body seemed to have merged with the sphere’s of water of which now rose. The drops lifted and lifted, swirling up into the sky where the moon had begun to be visible over the mountains nestled to the east.

Mitsuko’s body arched into the air, limbs splayed, back arched and head tilted towards the sky. The woman let out one last cry before she burst into a flurry of flames. The fire curling about the air in its furious dance until, just like the water, it was twisting about the sky to where the sun lay to the west.

Forever bound, the sun and the moon.

fire courses through them, boiling their blood and igniting their hearts.

But when the stars shine,

it is water that they hold, veins rushed with the cooling of its waves.