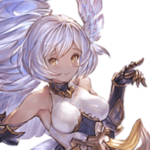 “Please.. Do me the favor of not letting me near.. Or save yourself by not getting in contact with me.. I.. I-I know it sounds rude.. But there’s only so much my heart can take.. Endless friendships and relationships going away with the promise of never leaving.. I really want to be by your side forever if I could.. But everything has to come to an end.. No matter how lonely I seem.. No matter how depressed I seem.. Do not.. Let me near..”

Yuki Himari Calissi (Also goes by Yu, YuYu, Yu-Chan, Hima, Mari) [She also goes by “Squeaky”, but that nick name is preserved for someone she holds very dearly. She allows nobody to call her that, but that one person. Not even those she considers close.] [Recent last name change; Yuki is now apart of the Calissi family, to which she has now changed her last name to Calissi, from Hayashi]

There had once been a Goddess of Insanity and Madness. She was named Manea. She had loved making messes and causing trouble. Mostly for the Holy Gods whom tried to make the planet and it’s humanity as pure as possible, but Manea had constantly interrupted that. She spread her madness, causing havoc amongst the humans. Her insanity spread as well, causing bloodshed. The Holy Gods were tired of Goddess Manea’s games and wanted to keep her under control. And so, they had cast a curse upon her after centuries of failed attempts. Manea had been cursed with the destiny to die, yet always become reborn. After each life and a new one given, she had forgotten everything; that included in who she was, what she was, what her position what and everything she once loved. This happens as an endless cycle, losing everything constantly. Now, she is born as Yuki.

Yuki has white, flowing hair that is as white as snow, thus, the name Yuki. Her hair runs down to her thighs. She also as piercing crimson red hues that pierces through the darkest of nights. As for her attire, Yuki wears a simple button-up blouse with a black skirt. On her right leg is a black stocking and a white stocking on her other leg. She wears a black shoe on the leg with a white stocking and a white shoe on the leg with the black stocking. Yuki stands at 5’1, weighing at 106 pounds. She is currently 20 years old.

Abyssal Flames: Blackened, extremely heated flames. These particular flames are found in the very depths of Hell; it is even considered extraordinarily rare to find these flames burning in Hell. Even more rare to be able to wield the power itself. The flames are found to be hotter than magma itself, burning anything in its path in an instant.

Weapon Summoning: The ability to summon a weapon of choice at command as long as a hand is held out with a chant. This chant can be said, as well as spoken in mind.

Strength Boost: A temporary boost in strength that can increase the User’s strength, the limit being 100x the user’s original strength or until the user’s stamina or magical energy expires.

Speed/Agility Boost: A temporary boost in Speed and Agility that can increase for the user by 20x the user’s original speed or agility. This as well will cease once the user’s stamina or magical energy expires.

Extreme Precision: This will increase the User’s sight in precision and accuracy greatly. This activation will cause a slit in the user’s pupil as well as a lightened color in the eye color.

Elemental Control: The ability to control the elements. Although there being many, Yuki, the user can only control the main elements which consist of water, fire, earth and air. Although, Yuki can also control others such as lightning, ice and magma/lava.

Closure: The user is able to erase the space/closure in upon a destination or object or person. This is used well on traveling, mostly mistaken for teleporting, but this does not work on going indoors while being outside, this also has a few hundred mile radius

Yuki does not remember whom, or what is truly is. She lives by the thought that she is a mere human when in reality; She is a lost Goddess. She doesn’t remember a think from any of her past lives. If she does happen to remember, her curse shall be activated to where she dies within 3 days’ time, thus restarting in a new life with new memories.

”Do not become attached to the things you know will break you.” Is what Yuki tells herself. Yuki is one that loves easily; that applies to friends and loved ones. She trusts too easily as well; even willing to put her life in the hands of a stranger without a second thought. Although afraid to love, knowing that all will someday leave, she finds herself already fallen for the traps of trust.

Yuki has trouble loving herself, so she makes up for that by loving everyone else. She tries her best and tries to make as many friends as possible, although she doesn’t have many friends, but she’s alright with that. She’s more than happy with a small amount of friends. Her insecurity is the reason for her happiness and enthusiasm.

Peace does not exist; only in word form. Nobody is willing the sacrifice the cost for peace