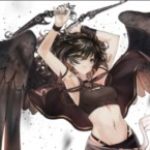 Jean lived a normal life as if she were a normal, human girl. But she was far from it. Jean was, and of course still is, a Reaper. She can foresee ones death if they come into physical contact with her; so she wears gloves and covers most of her skin. Jean also is able to reap souls, aka send them to Heaven, Hell or Purgatory. She has her own scythe and reapers cloak for when she reaps. But back to her origin, she found out she was a Reaper at sixteen. When her powers unlocked and she saw the death of one of her boyfriends.

She ran home to her mother, crying from what she saw. And then, Jeans mother told her who her father is. She was shocked and terrified. Not wanting such a grim ((pun pun)) fate. But she had to, and did get used to it. She now roams Hellifyno as it’s death number lured her there.

Death isn’t to be feared