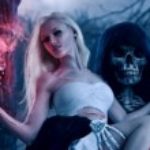 Jade Angel–dragon is a 41-year-old Owner  of Angel-Dragon tattoo shop who enjoys sword play. photography, videogames and eating out. She is confident and loyal, but can also be very shy and a bit frustrated.

She is a Halfling who defines herself as straight. She started studying law at college but never finished the course.

Physically, Jaded is in pretty good shape. She is average-height with Fair skin, pink hair and blue eyes.

She grew up in a middle class neighbourhood. After her father died when she was young, she was raised by her mother

She is currently with Ben Ronnie O’Doherty. Her last romance was with novelist  Alexander Nathan Price, who was 3 years younger than her. Alexander died in 2014.The papers reported the cause of death as an accidental overdose

Other words that might be used: average, fair, moderate, normal, ordinary, pink-haired, punky

Moral: not at all

Extrovert: not at all

Allergies and intolerances: none

2000-2017 worked at Blaney and Rochester as admin assistant.

Early years: Jade grew up in a middle class neighbourhood. After her father died when she was young, she was raised by her mother

Jaded got her first job as a admin assistant at age 20, started college but quit part way through the course when she found out she was pregnant with Drakonious.

Jade and Alexander then married on March 25, 2000, Alexander was the love of Jade’s life till he passed away in June of 2014.

Relationship: They are inseparable

Cause of death: infection of the brain

Relationship: They got on well most of the time

Relationship: They are inseparable

Cause of death: cancer

Relationship: She idolises him.

Relationship: Jade has always looked up to Karen.

Relationship: They get on well most of the time.

Relationship: Would rather see him dead

Cause of death: accidental overdose

Nuclear disarmament: all for it

Death penalty: all for it

Tax cuts for the wealthy: all for it

Protecting the environment: all for it

2000:Age: 20 Starts work at Blaney and Rochester as admin assistant

2014: Age: 35 Alexander passes away after a simple knee surgery, autopsy ruled it and accidental overdose, Jade thinks the hospital is covering up the actual cause of death.

2017: Age: 38 Resigns from job as admin assistant at Blaney and Rochester.