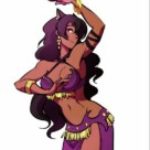 Education: None really. But Jade has always gotten by on her wit, her connections, and her beauty. Knowing the right people and having the right relationships matter.

Occupation: Jade is the owner of a nightclub and lounge called ‘Bad intentions’. During the day, usually patrons of all kinds come in for a nice relaxing afternoon of drinks, meals, amd the occasional ‘massage’ from Jade and a few other women. At night, business men and women, and the occasional weary traveler come in for a night of fun, lust, and drinks while Jade oversees the festivities.

Personality: Jade is a witty, comical woman who is easy going despite her strict rules within the club. Despite being a big feminist, Jade is kindhearted to every patron she comes across whether it be man, woman, or both. She is sexual, flirtatious, and mischievous, yet is not a ‘stale’ (whore).

Sexual preferences: Jade is a submissive woman in bed. She is usually up for anything, and has a master kink. She likes a dominant, assertive, and sure man, who won’t hesitate to put her in her place. Even though Jade knows her sexual preference, she’s still a virgin. And is very shy when the topic is brought up.

Other forms:  notaJade few has a few other notable forms she can take on. There is a panther form, a house cat form, a phoenix form, and a kelpie form. She’s able to transform into the panther, cat, and Phoenix forms quite easily, but the kelpie form is difficult, and she’s only ever managed it once, when in danger of drowning because of a kelpie.

When taking animal forms she must first touch the animal, and understand its soul then and only then can she take its form. She is yet to understand the soul of the kelpie, and is unable to fully take on its form. But, when faced with danger, she finds herself able to take on certain abilities of the kelpie.

You may not touch any waitresses or waiters in lewd ways without their permission, along with the dancers and bartenders.
All club patrons must be EIGHTEEN OR OVER!!!!
No payment is needed
No fighting
And most of all HAVE FUN!!!!

When in the club you may talk to the owner (Jade) or another worker about being taken to a back room if you’d like.

When it is lounge hours, you may enter, but there will be no dancers, and a few waiters and waitresses.

DANCERS, WAITERS, AND BOUNCERS ARE NEEDED! IF INTERESTED MESSAGE ME!

When roleplaying with me I am open to mostly everything. But you must be 18+!!! Or I will not agree!

For as long as she could remember, Jade had been told that because she was a girl she would go nowhere. The men in her family were rude to her, and the women off-putting. And being a hybrid, she was greatly disproved of. She grew sick of it and decided to show that women can, and do, have power by opening Bad intentions.

No longer will she let a man tell her what to do, or a woman for that matter.

If you want to know, I will show you a picture.

Her body, her wit, and her humor. (And the occasional knife for protection. You never know in a club)

I used to believe the people who looked down on me for my sex.

I am a powerful goddess, because I choose to be!