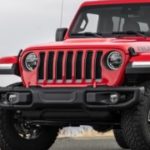 *slaps roof of Jeep* Made in the Toledo Complex, and later given an engine swap, this bad boy boasts 707 horsepower courtesy of a 6.2 L HEMI V8. That engine came straight out of a Hellcat. Jeep actually admitted that the Hellcat V8 will fit in a Jeep Wrangler, and even the Gladiator, but they won’t make a factory Hellcat version! So, we had to do it ourselves. I have no idea why. Like… they’ve made a Hellcat Grand Cherokee, and they’re coming out with a Hellcat Ram 1500, and a Hellcat Durango! Might as well shove that engine into a Wrangler, right? Maybe add some offroad parts too? Same with the Gladiator too, that thing would be a beast! But yeah… we’re stuck with these crappy Pentastar V6 engines, that make less than 300 hp.

A 2019 Jeep Wrangler Rubicon in Firecracker Red. That’s it. Just an ordinary Jeep… except for its Hellcat engine.