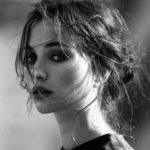 What heart of mine?

‘They say on the eve of my birth, a comet with a tail of blood red coursed the sky; nary a star to be seen on a cloudless night. I was born, unharmed, but my life was given in exchange for another; and so my father wept, and wept, and my birth was no longer a joyous occasion, foreshadowed by the mark of the devil – and the devil I saw, holding hands with my mother to beckon me to a blood-soaked grave; waiting patiently, day by day. I was to be his right hand, left of God – as promised. As foretold.’

Born in Newbury, England in the year of our lord 1623, Katherine Fethwicke was the only child of famed merchant, Richard Fethwicke and his wife, Amelia. Amelia, often fearful and superstitious, was made very sick by the pregnancy of her first child – and the night before Katherine was born the sighting of a comet would have her terrified of losing her child. However, this did not come to pass; instead, it was her own life that slipped away from her during labour – a fact that Richard never forgave his daughter for, and so he treated her neglectfully, wishing to distance himself from her and marry her off at first opportunity, despite how fearful he was of her.

‘Prepare yourself to meet God.’

As a young child, Katherine was plagued with visions; visions of a mother she had never seen, and a figure she often cited as being the Devil himself. The visions tormented her dreams, torturous and cruel, and she often wept late into the night until she fell ill with exhaustion, cared for by her handmaids who would help her recovery only for her to do the same. Cyclical in nature, Katherine soon learned to keep silent about the things she had seen, lest she be locked away where she would not be looked upon and forgotten about – and as she flourished into adulthood, she would draw a reputation amongst the public for her exceedingly good looks and curiosities, as well as drawing the eye of many for supposedly being a ‘loose’ woman.  Though these accusations never came to fruition, tales of her kindness and friendliness were oft manipulated into stories of all else.

At the age of 19, Katherine was to be married off to Charles Harlowe; a man she found wonderfully agreeable. The match was good, and great and filled with love – but shortly after their marriage began the English Civil War, a time of much strife and division in the country. Implicated in a scheme against the King, her husband and father were hung publicly, and so she found herself destitute – and without a place to go. Turning her face away from God as he had done her, Katherine soon turned instead towards the traitors to the Crown; keeping their hands in their pockets and her heart cold, aiding wounded soldiers and prying information to feed back to those who stood against the very same regime that killed her love. She kept herself fed with this and finding herself bedfellow after bedfellow, soothing her aching heart with the touch of another where necessity struck her.

But alas, Katherine was ever in danger by virtue alone. In the rise of the Witch Trials, taking hold in the dark and violent fury of the civil war, the time she had spent quelling her visions meant nothing – the devil saw fit to dance upon her shoulder once more. When her friends and bedfellows were found guilty of treason to the crown, she was subjected to something else entirely – her reputation and tales of her visions ending with her execution, signed by the Crown and Matthew Hopkins; daubing her name for the rest of history as the whore of Lucifer.

‘The devil greets me; welcomes me home. His touch does not chill me. I am whole again.’

Her tale did not end there. Not for her, at the very least. On the eve of her execution, a comet streaked the sky once more, heralding her death in the same way it had her birth. As the noose tightened around her throat, she spoke in tongues, a smile upon her face. And on the sixth day of her passing, she rose again; her fingers sinking into the dirt of the earth she had been returned to, fear in her heart – and the devil pulled her free from her shared grave and wiped away her tears.

‘If a God runs from his people; is he still a God?’

Why she had been spared, she did not know. Whether to do her duty or for revenge, or fulfilment or aught else; she only knew that her heart beat and her veins still bled red. Though she could not return to her previous post, the war still raging, she adopted a new name and discovered she was benefitted the laws of the dead and heavenly bodies to her human body; walking amongst spirit and living alike – and determined to fulfil her duties as she saw fit. And yet even with those fulfilled, she still wanders; filling her heart as ever she saw fit, and intertwining her fingers with that of the Devil.

A classic beauty; with rosy cheeks and reddened lips, pale skin a milk-white. A brush of freckles upon the bridge of a straight nose, and waves of luxuriously dark hair, now trimmed short in a long bob. She keeps her attire neat, stylish and simple as necessary, carrying with her an air of calm confidence.

the dead; risen to walk the earth once more – for vengeance, or aught else. destined to never move on.