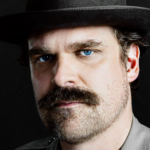 active 9 months, 1 week ago
Base

Hopper is Chief of Police in the small, sleepy town of Hawkins, Indiana, where he lives out a carefree existence – yet he is haunted by a troubled past. After the young son of an old friend disappears into thin air, Hopper’s life becomes infinitely more complicated.

Jim Hopper attended school with Joyce Byers and Bob Newby in Hawkins. Hopper hints that he wasn’t exactly the model student while in high school; on at least one occasion, he lied to his mother about his whereabouts, so he could secretly hook up with girls such as Chrissy Carpenter.

Storage boxes kept at the cabin of Hopper’s grandfather indicate that Jim served in the Vietnam War, and that he also spent some time in New York.

He later married a woman named Diane and moved to a “big city” – likely New York – where he worked in the police force. Together they had a daughter, Sara. However, Sara was diagnosed with cancer. Despite receiving cutting-edge chemotherapy treatment, Sara was unable to recover, passing away at a young age.

After her passing, Jim and Diane divorced. He moved back to Hawkins in 1979 where he became Police Chief at Hawkins Police Department, a largely carefree occupation due to the town’s low crime rate. Hopper started to rely on alcohol and prescription medication to get through his days and began sleeping around with women much younger than himself.

The loss of his daughter and family life left Hopper emotionally reserved and cynical. To manage his pain, he regularly drank alcohol, smoked several cigarettes a day and developed an addiction to anti-anxiety drugs. Instead of making real connections with people, he slept around with several women who he never contacted again.

Despite being the Police Chief, he didn’t care about his job, as he regularly slept in and showed up late, and had an indifference to the cases brought to his attention. Only when Will Byers went missing and it turned out to be a government cover-up did he start caring about doing his job properly, as he had a personal interest in the case.

As an Army veteran and Police Chief, Hopper is proficient with a variety of firearms, ranging from revolvers, handguns and .22 LRs to shotguns, submachine guns and assault rifles.

He also seems to have some experience as a radio operator, and teaches Eleven how to communicate over the radio using Morse code.

Jim once had a daughter named Sara, who died of cancer.

His ex-wife Diane was Sara’s mother. She and Hopper have been divorced since Sara’s passing, and Diane has gone on to remarry a man named Bill and have another child with her new husband.

After her defeat of the Demogorgon at the end of the first season, it is revealed that she comes back through a Gate, and escapes the school. Hiding in the woods, Hopper had been leaving food for her in a lock box until she one day arrives during one of his drops. Hiding her for almost a year in his grandfather’s old cabin, for what he believed to be her own safety, the two form a father-daughter bond. At the end of the events of Season 2, Hopper adopts Jane officially.

Joyce and Hopper attended high school together and at one point were in a relationship. However, they separated when Joyce and Lonnie got together.