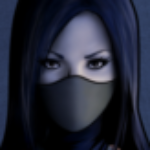 The Jin Princess has never reveled her true name.

She has recently joined forces with Lucien’s cause. She has a vengeful heart against all species with supernatural powers – she will avoid or attack such creatures. Highly trained in most martial arts, including The Art – which enables her to convert all energy (including spells) into kinetic and emotional attacks against her victim, the Jin Princess should not be trifled with. Unexpected attacks against her seem to be the best approach to overcoming her.

The Jin Princess carries with her two katanas. She wears very little in attire. She is very accustomed to atmospheres with dry and intense heat.

All species with supernatural powers must be eradicated.