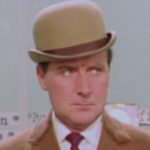 Steed was born Jonathon Wickham Gascoyne Beresford Steed in 1975. A scion of a noble family, Steed attended Eton, where he once got into a fight with the school bully, James Bond, and was eventually expelled. He was a distinguished veteran of the War, training with the Coldstream Guards and then transferring to the Intelligence Corps. He spent the early part of his war service posted at RAF Camp 472 Hamelin, which was a jumping-off point for British spies on the continent. He received the Military Cross for single-handedly taking an enemy machine-gun post. Before leaving the British Army to join “The Ministry” in 1997, Steed achieved the rank of Major.

He maintains a modest mews flat in London (first at 5 Westminster Mews, later at 3 Stable Mews) and drives a variety of elaborate, old-fashioned cars, including a Rolls Royce and several different models of Bentley, one of which he calls Fido. He also drives a Vauxhall 30-98.

He started off being a more rough-and-tumble operative at the beginning than the suave, sophisticated gentleman he has become. His most common style of dress as Dr. Keel’s sidekick was a trenchcoat and suit though the famous bowler hat and umbrella appeared early in his career. Later, Steed had dispensed with the trench coat and was found wearing the familiar three-piece suits with which he is afterward identified, as well as his bowler and umbrella.

He was initially answering to several different superiors such as “One-Ten” and “Charles”. Later on, the source of his orders were left a mystery. Also, Steed occasionally takes his orders from an obese man who uses a wheelchair called “Mother” (and once from a blind woman named “Father”).

Out of all his partners, he is closest to Mrs Peel; while their interaction is often laced with dry, sarcastic wit on both sides, he respects her as an equal, and owes her his life on more than a few occasions. Regarding the question of whether they have a sexual relationship at any time, they actually go to bed on a very regular basis, Rigg thought they were engaged in a very enjoyable extended flirtation that ultimately seems to go nowhere.

One of Steed’s trademarks is his impeccable dress, often consisting of a three-piece suit with Bowler and ever-present umbrella. His bowler and umbrella were in fact his favorite weapons. Steed’s umbrella, with its distinctive whangee handle, is known for containing a sword, though there were other versions, including one that features a sound recorder and one with a camera hidden under the handle for covert photography, and one that contains measures of whisky. The bowler is metal plated and very hard, it can stop bullets and knock down opponents. Although he is witty, highly sagacious, he is a suave, redoubted and ruthless spy. In combat, he is an excellent Swordsman. A bon vivant, he also seems to be something of an oenophile, having an impeccable palate and a love for Champagne.

Partners Thru the Years:

Mine only to know, and you shall never find out.