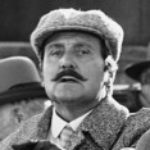 Dr. John H. Watson is a medical doctor, formerly in the British Army. He was married to Mary Watson and is arguably the only friend and confidant of Sherlock Holmes.

In the debut Holmes story A Study in Scarlet, Watson, as the narrator, describes meeting Holmes, their subsequent sharing of rooms at 221B Baker Street, his attempts to discover the profession of his taciturn companion, Holmes’s eventual taking of Watson into his confidence, and the events surrounding their first case together. Watson describes Holmes and his methods in too romantic and sentimental a manner for Holmes’ taste. In time, they become close friends. In The Sign of Four, John Watson met Mary Morstan, who became his wife. Mary seemed somewhat less sure of her husband, however, absentmindedly calling him “James” in the short story “The Man with the Twisted Lip”. This may be a simple typographical error, though some have speculated that it is a wifely reference to Watson’s unknown middle name, which could have been “Hamish” (Scottish for “James”) Dorothy Sayers, creator of the detective Lord Peter Wimsey, also wrote several essays on Holmesian speculation, later published this theory in Unpopular Opinions. Watson is a physician of some experience (as was Conan Doyle). Watson had served in the British Army medical corps in Afghanistan, but was discharged following an injury Watson gives two separate locations for the Jezail bullet wound he received while serving in the British Army. In A Study in Scarlet he states “I was struck on the shoulder by a Jezail bullet, which shattered the bone and grazed the subclavian artery.” However in The Sign of the Four, Watson informs us “… [I] sat nursing my wounded leg. I had had a Jezail bullet through it some time before, and though it did not prevent me from walking it ached wearily at every change of the weather”. “The Adventure of the Noble Bachelor” contains the only other reference to the injury. Here Watson is a little ambiguous; he tells us “the Jezail bullet which I had brought back in one of my limbs as a relic of my Afghan campaign throbbed with dull persistence.” received in the line of duty during the Battle of Maiwand. Watson was almost killed in the long and arduous retreat from the battle, but was saved by his orderly, Murray. He was also struck with fever and was invalided out of the Army with a half pay officer pension of 11 shillings and 6 pence a month. When Watson first returns from Afghanistan, he is “as thin as a lath and as brown as a nut.” His more normal appearance is hinted at in “The Adventure of Charles Augustus Milverton”: “… a middle-sized, strongly built man–square jaw, thick neck, moustache …”. In The Hound of the Baskervilles he notes that he is “reckoned fleet of foot”. By 1914 (in the story “His Last Bow”), he is described as “thickset”. He is evidently not ill-favored, as Holmes several times jokes about Watson’s success with women. Not very much is written about his family-his deceased father had the same initials as his son and was prosperous enough to own a 50 guineas watch; he had a elder brother also deceased whom Holmes after studying the heirloom watch deduces that although he was relatively prosperous he was also careless and was addicted to strong drink; pawned his heirloom watch four times (although he redeemed the pledges) and the reminder of his brother’s life is a very painful subject for John Watson personally. By the time Watson comes back from India, he admits to having no living kin in England.

Watson is not a stupid man (he is, after all, a medical doctor, and one whose talents Holmes holds in the highest esteem), but he does not have Holmes’ insight. He serves as a foil to Holmes: the ordinary man against the brilliant, emotionally-detached analytical machine that Holmes can sometimes be. With the two, Conan Doyle created a clever literary pairing: two vivid characters, different in their function and yet each useful for his purposes. Watson is well aware of both the limits of his abilities and Holmes’ reliance on him: “[Holmes] was a man of habits… and I had become one of them… a comrade… upon whose nerve he could place some reliance… a whetstone for his mind. I stimulated him… If I irritated him by a certain methodical slowness in my mentality, that irritation served only to make his own flame-like intuitions and impressions flash up the more vividly and swiftly. Such was my humble role in our alliance.” Conan Doyle portrays Watson as a capable and brave individual, whom Holmes does not hesitate to call upon for both moral and physical assistance: “Quickly Watson, get your service revolver!”. Watson occasionally attempts to solve crimes on his own, using Holmes’s methods. For example, in The Hound of the Baskervilles, Watson efficiently clears up several of the many mysteries confronting the pair, and Holmes praises him warmly for his zeal and intelligence. However, because he is not endowed with Holmes’s ability to focus on the essential details of the case, he meets with limited success in other cases, as Holmes remarks “Quite so… you see, but you do not observe.” However, as a military man, Watson is the better strategist, besting his friend at chess, who prefers to observe. In the story “The Adventure of the Solitary Cyclist”, Watson’s attempts to help Holmes with an investigation prove unsuccessful because of his unimaginative approach, e.g. asking a London estate agent who lives in a particular country residence (according to Holmes, what he should have done was “gone to the nearest public house” and listened to the gossip). Watson is too guileless to be a proper detective; as Holmes observes in The Valley of Fear, he has a definite strain of “pawky humour”, but he is naturally open and straightforward, while Holmes can be secretive and devious. Though initially their relationship was little more than vaguely acquainted roommates, the two became the very best of friends, almost like brothers. By the time they shared “The Adventure of the Three Garridebs”, Holmes had such an attachment to his friend that he nearly panicked at the thought that Watson had been shot. Watson wrote: “It was worth a wound it was worth many wounds to know the depth of loyalty and love which lay behind that cold mask. The clear, hard eyes were dimmed for a moment, and the firm lips were shaking. For the one and only time I caught a glimpse of a great heart as well as of a great brain. All my years of humble but single-minded service culminated in that moment of revelation.” Holmes returns to himself only when he is assured that Watson has been merely scratched by the bullet, adding to the perpetrator that “…if you had killed Watson, you would not have got out of this room alive.” Though he never masters Holmes’s deductive methods, Watson is acute enough to follow his friend’s reasoning after the fact. In “The Adventure of the Norwood Builder”, Holmes notes that John Hector McFarlane is “a bachelor, a solicitor, a Freemason, and an asthmatic”. Watson comments, in his narratorial role: “Familiar as I was with my friend’s methods, it was not difficult for me to follow his deductions, and to observe the untidiness of attire, the sheaf of legal papers, the watch-charm, and the breathing which had prompted them.” Similar episodes occur in “The Adventure of the Devil’s Foot”, “The Adventure of the Solitary Cyclist”, and “The Adventure of the Resident Patient”. Watson is something of a ladies’ man (boasting in The Sign of Four of “an experience of women which extends over many nations and three separate continents”) and fans of the Conan Doyle stories have long speculated as to just how many times he was married.

IN THIS VERSION… (OOC)

He is very much the same as in the books , Made for TV Movies as well as theatrical releases, -this one specifically being from the TV Movies portrayed by actor Patrick Macnee. But, what I have done to him is to make him go from a man whom the ladies loved, to a man whom also had an attraction to men. Yet, he has never acted upon those feelings until having met Sherlock Holmes and becoming his flatmate. It was then that he no longer tried to suppress any sort of homosexuality.

His attraction is solidly on Sherlock, whom went from acquaintance to friend, to like a brother. But, once John allowed himself to go beyond that, it became much more. In my rps thus far, I have placed in that he and Holmes even shared a night together- both being intoxicated at the time. Yet, Sherlock is not willing to acknowledge what had happened, and this has crushed Watson emotionally. They still work together as well as live together, yet everything is incredibly strained between them. John wishes to pursue a relationship with Holmes, yet does not want to further destroy what friendship is left. He’s torn.

Also, he is a bit dimmer than some portrayals of Watson have been. He is intelligent in his own right, but he is a little more simpleminded than Watson ever was.

…an attraction to men.