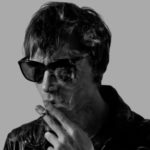 I am the son of Ville, grandson of Loki, God of Mischief and great grandson of Odin, AllFather, son of Borr. Sounds impressive, huh? Just call me Juho.

I think I need to start liking horses, if for no other reason than to have a subject of conversation with Lindir

Had my heart broken, but now I think I'm in love with my sister's teacher.

Loki’s grandson through some weird sort of magical spell. Something like that. I don’t know the whole story as and my father kind of has a pissy attitude when I ask. Short story is I have two fathers and a grandfather who was happy his spell worked.

Dark, moody and handsome, just like dad. But my dad has much more musical talent and I’m just practicing getting my butt kicked as a kickboxer. I play bass too in a band with my two best friends, Jussi and Jyrki, so there is something good.

I can do magic. It doesn’t bother me but I can stand for some improvement. I have to know spells because otherwise I’d be blue all the damned time.

I’m not as irritated with my dad as he thinks. He’s actually a pretty cool parent, but I just can’t play music or sing as well as him. It bites!

my great grandfather Odin would squash me like a bug if he ever got the chance.