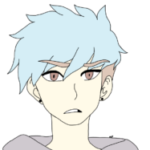 He was born into a family of many children, he was the only boy and his mother did many things to pay the rent, he doesn’t know who his father is. Noah had been in denial of his sexuality, always trying to get with girls even he he didn’t like it. He was often abused by his mother and the men his mother would be with. His mother told him If he was ever gay he would be kicked out. He has been suicidal for a long time and had tried to get better but not much has happened there

Eyes: Brown
Hair: Brown on sides and blue on the top

Piercings: Snake Bites and a lot of his ears are pierced but he doesn’t always wear them