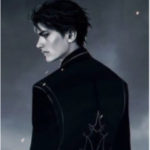 Everything was fine until my life changed four years ago. I lived in a small town with my parents and younger sister. As vampires, we tried to keep to ourselves and stay out of trouble but the villagers still had their suspicions. Luckily for my sister and I, our parents would never show their sadness around us. They only smiled and continued to remind us of how much they cared. Our peaceful life vanished in an instant when we watched our house burn down one night. The towns people found out about our existence and killed our parents. My only thought was to flee from the only place I knew as home, taking my five year old sister with me. Unfortunately we weren’t able to get very far before the hunters found us. I was able to fight off some of them but couldn’t save my sister.
After wandering the forest and surviving on the blood of wild animals, I finally came across another person. It was a middle aged man who looked horrified to see me covered in blood and alone in the forest. He took me to his home where his wife waited, pregnant with their first child. Even after finding out I was a monster they still nursed me back to full health and treated me like part of their family. For someone who had their entire life taken away in the blink of an eye, I was happy again. A few months later the mans wife gave birth to a baby girl whom they named Sophia. Her big blue eyes stared back at me and I immediately fell in love. I was going to protect with my life and treat her as I did my younger sister.

The couple allowed me to stay with them and I watched Sophia grow to her first birthday. Everything was perfect. After some time it seemed like being a vampire was only a curse. The hunters found me and killed Sophia’s parents in front of her. But I wasn’t going to let them take her too. The fight was long and gruesome, I barely made it out alive. Thankfully, Sophia was safe but in order to keep her from hating her own kind, I lied and told her the vampires killed her parents. Now I spend my days with her, hoping to keep her from figuring out what I am and hating me forever.

I am 5’11” and very fit. My eyes are golden brown and my hair black. I may seem cold and distant on the outside, but can warm up to the right people. I may look young but my age is past thousands.