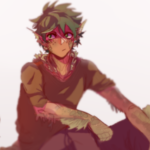 The writer is fine with minor alterations to their character for/and playing non-canon roleplays in PMs. Please be literate though, above 3-4 lines per response if possible. Writer is also 18+.

Age: Around 1000+ in prior Imugi years. Has been consciously alive for around 18-20 years, but hadn’t been using his human form for as long as his Dragon form, making him look slightly younger than he would otherwise.

Whereas most dragons in European mythology are linked to the elements of fire and destruction, dragons in Korean mythology are primarily benevolent beings related to water and agriculture, often considered bringers of rain and clouds. Hence, many Korean dragons are said to have resided in rivers, lakes, oceans, or even deep mountain ponds.

Ancient texts sometimes mention sentient speaking dragons, capable of understanding complex emotions such as devotion, kindness, and gratitude. One particular Korean legend speaks of the great King Munmu, who on his deathbed wished to become a “Dragon of the East Sea in order to protect Korea”.

Korean folk mythology states that most dragons were originally Imugis, or lesser dragons, which were said to resemble gigantic serpents. There are a few different versions of Korean folklore that describe both what Imugis are and how they aspire to become full-fledged dragons. Koreans thought that an Imugi could become a true dragon, or yong or mireu, if it caught a Yeouiju which had fallen from heaven. Another explanation states they are hornless creatures resembling dragons who have been cursed and thus were unable to become dragons. By other accounts, an Imugi is a proto-dragon which must survive one thousand years in order to become a fully fledged dragon. In either case they are said to be large, benevolent, python-like creatures that live in water or caves, and their sighting is associated with good luck.

In the 2007 South Korean film D-War, two Imugi, of which one was benevolent and the other evil, were seen competing for possession of a source of power (the Yeouiju) by which one of them could become a dragon. Ultimately, the evil Imugi is destroyed by his rival moments after the latter had captured the source. Here, the two are shown to be physically different, in that the evil Imugi is darker-coloured, more slender and distinguished by an inflexible hood similar to that of a cobra, whereas the good Imugi is paler, stockier, hoodless; and more closely resembles a python. Narration in the film implies that many Imugi exist at a time, whereof few are designated to become a dragon.

The user is or has the ability to take on the form of Asian Dragon typically portrayed as long, scaled, wingless serpentine creatures with four legs with features of several (traditionally nine) different animals.

They symbolise potent and auspicious powers, particularly control over water, rainfall, hurricanes, and floods, and are also symbols of power, strength, and good luck. They also have an extended range of supernatural powers, changing size or form (most are able to take human shape), fly among the clouds or hide in water, form clouds, turn into water, change colour as an ability to blend in with their surroundings as an effective form of camouflage or glow in the dark.

Unlike western dragons, oriental dragons are usually part of spirit-community (if they aren’t spirits themselves), either living with others of their kind and/or with a court of spirits. They have close connection to Celestial authorities and have often their own fieldoms to govern, typically a river, lake, or other body of water.

The user is capable of performing dragon-related magical feats, often either taught by a dragon, siphoning magic from a dragon, being magically linked with a dragon, or being a dragon. But it truly depicts magic that is exerted by dragons, since most dragons are described as magical creatures to their very bones, the source of their magic is unknown. The user has the ability to wield this form of magic to cast spells and other magical styles.

Iron is allergenic to dragons.

This specific draconic boy isn’t at the height of power that his kind of Eastern Dragon species can reach; as such, he’s weaker than the most powerful variants.

His overall personality is gentle, secluded, wild, adventurous, and timid/shy. He has an alright understanding of the world around him, of Human customs, languages (Only fluent in Korean and Dragonic), etc. However, despite being effectively an adult, he almost has the mind of a child, and can make easy mistakes, and be overwhelmed by how busy some areas of modern Humanity & other races can become, preferring to stick to smaller, quieter settlements, or away from civilisation all together.

A young Eastern Dragon from Korea.

Straight, into females/female dragons. Much more a Beta than an Alpha male.

Once a simplistic, somewhat single-minded and instinctive Imugi from the wild lands of Korea, after finally achieving the status of a fully fledged Dragon 1000 years on, he went through a rather dramatic and rare change in physiology. Instead of remaining solely a Dragon, the soul of a lost Human worked its way into the transformation process. As the soul was of a small Human boy, naturally this gave the newly reborn Dragon/Human a smaller appearance in both forms, despite technically being of adolescence.

For the next 100 years or so, he lived a relatively peaceful life in the most sacred and mountainous areas of the Korean Peninsula, a huge rift valley of towering peaks, flowing rivers and waterfalls, lush plant life, and their village settlements, as most of these dragons enjoyed the lifestyle of the humans living in other parts of their realm. For a long while, the times of growing up for Draco didn’t go all that well. Thanks in part to the human soul he was integrated with, compared to a lot of the other male Dragons in the area, he was considered the ‘Beta’ of the lot, often being ignored by others, sometimes treated like a kid. As in their society it was commonplace for a male Imugi Dragon to conceive with either one or many females, this proved to be a curse of sorts upon the smaller and shyer Dragon.

However, as a great dragonic war broke out between neighbouring realms of hybrid species, things began to take a turn. As most of the stronger males went about fighting in the great skirmishes and clashes between their own brethren, and the humans who hunted them for sport or war games also, Draco was one of few left behind with the villages many females. As such, over time they began to warm up to him, /quite a bit/. Before anything too exotic happened however, their village was raided due to the destruction of the temporal barriers guarding their sacred grounds. As such, a few tried to escape with Draco, however a mishap with a teleportation spell caused the young Dragon to be hurtled through time and space, landing down on the soils of Hellifyno’s Southern Continent…. 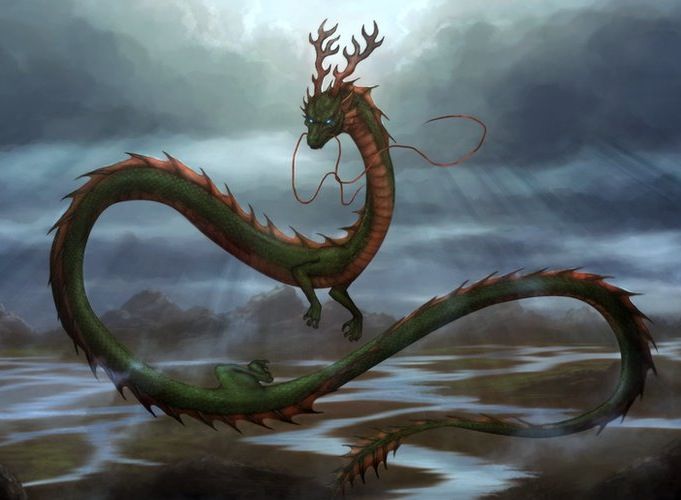 In Dragon form, Draco takes the form of an East Asian Dragon (Korean). His build is 45′ tall and 70′ long, serpent-like, slender yet rather robust and strongly muscled, with thick/smooth scales along the upper part of his body & limbs, and more white-skin colour scales along his abdomen and lower body. A continuous aquatic-like sail stretches along his back all the way to the tail, where the sail doubles up on the top & bottom of the tip, resembling a fan. He has long, moustache-like tendrils flowing gracefully from his snout, glowing blue irises, and deer-like antlers growing up in a branching configuration. 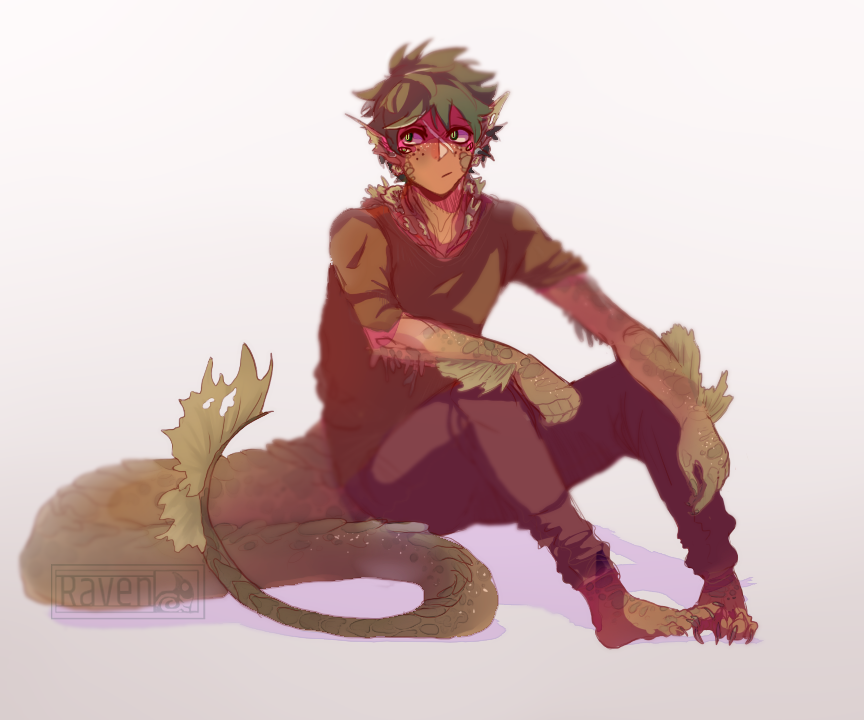 In Human form, Draco takes the form of a rather short humanoid boy (5’0″), although he is of adolescence. His ordinary skin tone is a gently tanned white, resembling the abdomen colour of his dragon form. This is blended with a murky/plant green scale/skin hybrid covering over most of his body, including his hands & forearms past the elbows, his feet and legs below the knees, some of his neck and chest from his arms, and some on his face and ears. His ears are pointed, almost elfish in looks. He retains a tail in this form, as his kind aren’t able to replicate that of a full Human. The tail is about 4′ in length from base to tip, with a half-sail connected at the tip, and smooth scales in the same colour pallet to his Dragon form running along its entire length. His eyes in this form are slits, and emerald green with a glow to them.

This ring was forged with an ancient metal, given to Draco by one of the village elders in light of being the youngest Imugi Dragon ever conceived by previous Imugi longevity + Human soul infusion. It represents the Yin and Yang, of which is a staple for many East Asian beliefs.

None in particular to note.