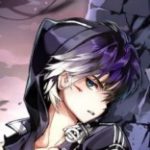 Lol what do I put here

I am a hired assassin (i currently work in a mall), who is shy, and only about 15 or 16, and has an overall feminine appearance

I fled from Japan when I had my house burned and my family slaughtered in front of my eyes. I came to this place in hopes of starting new.

I have purple fading to white hair, and a scar on my cheek, I’m most often in a white long sleeve shirt, and have a black leather jacket with a hood. My eyes are white, but turn different colors depending on my mood. I have black ripped jeans, and black converse, and I usually have my hood over my eyes, and i have wolf ears and tail, which i only show to people I trust, and I’m also a saint slayer, which means I have a giant black and white cross on my back, with multiple red upside-down crosses on every end.

I usually have two guns, a bow and arrow, and two katana’s, but I mostly fight with Eternity magic. (Which is magic powerful enough to kill an immortal being)

I act tough, but i am actually really scared, and I cry easily, I don’t talk about my family often, and I am in atheist and masochist. I have also whipped out entire cities, so I don’t talk about my job. I am also a celestial spirit that was outlawed from being used as a weapon a long time ago, but people still try to contract me.

I believe in revenge, and mercy.