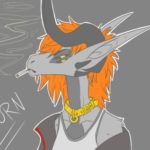 If you can figure me out then I’d be interested to hear who I am.

That's just it! I have no clue.

Always on the lookout for a mate.

*She was a tall Dragoness, to the top of her horns she was roughly seven feet tall, though her eye level was around six foot two. She had a thin, athletic build and was covered from head to toe in dark grey and black fur. She was bipedal, with a long straight tail like a raptor. Four golden eyes set onto a thin snouted face gave her a slender appearance. Her two large raptor-like talons on each of her feet would occasionally click against the ground upon which she stood. She always wore a gold dog collar around her neck, adding a flaming contrast against her bright orange mane that fell into her two left eyes. Her clothes almost always consisted of a dark blue hoodie, black torn jeans and a number of bracelets and chains around her wrists and wound into her belt loops. In all, she was your basic, punk, dragon teenager.*

*On occasions she would bring a dagger to keep at her side, but for the most part she simply carried the clothes on her back.*

few and far between… though there are some that even I can’t bring myself to admit to myself, let alone others.

That I can make it through this life.