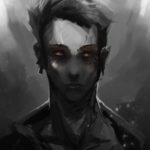 Kel-ah is an entity who out dates the Old Ones of Cthulu.  His age is relatively unknown but it has been sourced that he was likely there at the dawning of creation. Originally, he was the right eye of the Mother, an entity quite like himself but more powerful and corrupt. His first true form on Hellifyno came through the body of Augustus Giovanni who became his avatar.

Kel-ah’s mind is traverse and he often does not think like a normal human being would, his actions and responses coming off as odd or fickle in any case. He needs a body in order to survive and will never truly die until his incorporeal body is destroyed. He was separated from Augustus in 2014 and has been separate the man since then, though most of his bodies came out looking quite like the man since he was the first figure to give him form.

He is known the candle man because, during the stage of his acquiescence, the bodies of his victims become candle-like, their bodies melting and conforming to his standards, to adapt to what he needs and what it takes to use his energies. He is known as a god in many cultures: Set in Egypt, Thanatos in Greece, Mors or Letum in Rome, and so on, so forth throughout history. By his hand and involvement, he has started and sparked several wars throughout the history of Earth.

He has no real emotions, only what he calls bonds which are ties to people. Some of these can come off as emotions but he can just as easily void those connections to let them die than live and he wouldn’t feel a thing.

He is known to be chaotic and will often go out of his way to do things that do not make sense. He is a truly malevolent creature with nothing better to do but ruin the world and fashion it into an immortal bliss for himself.

Power wise, there are several things he can do. He can reach into someone’s mind, twist their reality and memories to his benefit. ‘Spores’, quite like those from the game, The Last of Us, flake off of his flesh and upon settling on anyone, offer the effects of LSD and a sudden, intense sensation of persecution.

His hands bend and mend flesh into whatever he desires someone to be and he has, indeed, used this to his advantage throughout history. One such change was making someone into Hitler’s double and Hitler into them so he could escape death since Hitler had information pertaining to some of his ‘Family members’.

He has connections and his own little world that is essentially a pocket dimension of torture and horrors.

His eyes are multifaceted and he wouldn’t think twice about breaking a deal for his own benefit or for that of someone he has a bond with, for any reason, really.