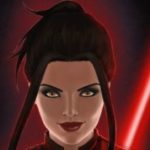 Kial was once powerful in the ways of the dark side of the force she was as cruel as she was cunning. She was something of a prodigy when it came to using the force her lightsaber skills at first were good enough but that would change as time progressed. She always lusted for more power and wealth it was never enough even when she gained the title of Darth. She always wanted more at some point she learned a technique that allowed her to drain the force from her opponents slowly during a battle. This technique slows down her aging greatly allowing her to stay young for an unknown amount of years. Everything was going perfectly for her until she lost her memory’s during a battle with multiple Jedi maters. It is unclear what happens to cause her memory loss but it is suspected that she cracked her head on something during a fall she was left for dead. She would awake not knowing her or what she is or why she had two lightsabers one red and the other green. She would spend multiple years drifting from one planet to the next not knowing why people would flee from her. Knowing only her name she would make a living as a bounty hunter not knowing why she could fight almost perfectly with her lightsabers or why she could use what people called the force. She has decided to leave her past life behind now only caring about surviving. She started out taking any contract that she could get but pretty soon she would only take high paying contracts most of her work came from the Huts. Once again her name was known throughout the universe.

Long brown hair pulled back into a ponytail

Black pants with three yellow stripes on both thighs

Both of her lightsabers

I don’t have any to tell you

The strong eat while the weak starve