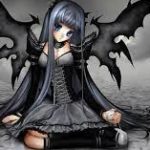 Kirst was born an illegitimate hybrid, of fairy mother and vampire fairy. her parents were not married. However they kirst until she was the age of 5. Her mother did not have the heart to kill her or keep her. so she took her into the woods, where she was abandoned  and told to never return.

kirst raised herself traveling anywhere her small wings and feet could take her, forging for food and teaching herself magic, for both sides of her blood line. she made weapons herself with the wood from the trees and stealing scrap metals from the back of shops in towns.

when she had grown into an adult she returned to her parents house, where she killed both her mother and father, with some of her newly made daggers. afterwards, she scored “mother” into one dagger and “father” into another. so she could always hold close the ones that she killed with. vowing with every new thing she killed she would name the dagger she used after it.  taking all the weapons they possessed. which didn’t happen to be much.  she set the house on fire and walked away. never to return.

Now as an adult to no ties anywhere, she set off to find out what the rest of this world had to give her.

long dark hair, usually wearing crop tops and mini skirts of all kind. her wings are slightly damaged from the battles she has had to fight in her life. her skin is pale and slim built. Tattoos on her forearms, scars all over her body.

for her to know and you to find out

In anything is possible