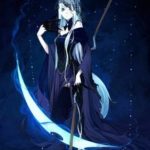 I am Kisa, demon who has worked for Death as a side job for hundreds of years.

Already in a relationship

One cold night, in the woods of a foreign country back in the day, a couple that was possessed decided to raid a house that was in the woods. They knew from the town that it was a family that just started so the kid would be easy to get rid of. As they ransacked the house, screams and begs for help from the couple to spare them and take everything. When they finished murdering the couple they left the child in her crib for death, they had everything they needed and more.
The child cried for 4 days until the last croak came out and died of malnutrition. Death finally appeared to the child’s eyes as he began to cradle her. He had been there since the parents were sent to their destination.
This was where Death got soft and thought maybe he could have a apprentice, 20 years later she signed her soul to the Underworld to be a hitman whenever needed and a death scythe holder.