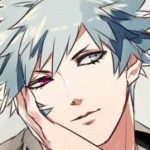 Near immortality, the only way to kill him is by erasing his spirit which is located in the deepest parts of hell

Control of flames shadows and lightning

Due to being born from an infernal making Kisame inherently wicked he enjoyed killing and spreading misery. It does not matter to him who he hurts as long as he can have fun. This would lead many to attempt to kill him but none would exceed the worst they did was sending him to hell. But that just leads to him becoming stronger upon his return. He slaughtered millions just because he was bored in reality Kisame doesn’t really know why he does what he does. All he has ever known was to kill and hurt people there is no point for him to try to change now. It’s too late for that so he will continue to hurt people He does not care that others hate him all he cares about is having fun.

One red-eye and one silver eye

A black crescent moon located on the back of his neck

You have to look out for yourself first before anyone else