active 4 months, 1 week ago
Base 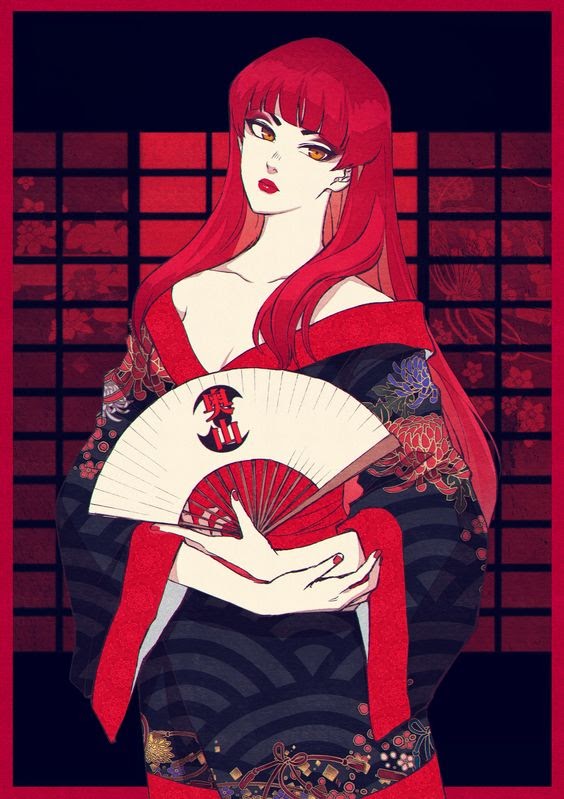 For thousand of years The Okuyama{Heart of the Mountain} bloodline has ruled over the clan ever since they first of the Kitsune came to the mountain and took the surname. Ryoka The Fox and oldest ancestor of Ruka united the Yokia  of the land and soon created the Okuyama Estate. A giant castle built on the top of the mountain.Today Ruka rules the Clan and Those who carry this name are blood related to ruka And are Kitsunes like her. The Okuyama have always been a wealthy clan but do have a history of bloodshed.

Ruka herself grew up with this bloodshed. The war on humans who hunted them. Blood feuds of other clans. Even her own family. In fact Ruka murdered her own mother to become head of the clan. Her father as well. Both became too passive for her, in time of peace. She felt the clan needed a strong leader and a ruthless one as well when it was needed.

control chi that has been tainted by negative energy a.k.a evil. Due to this, they gain access to powerful dark abilities and forces that are able to give the user incredible power.

Berserker Physiology:  becomes a dangerous fighter that possesses an unquenchable thirst for battle and a frightening degree of power.

Feral Mind: User’s are able throw themselves into a murderous frenzy of rage.

Tranquil Fury: Those who are in tune with their dark chi are able to channel their rage without the loss of control.

Killing Instinct: The user possesses a need to kill as well as the knowledge of how to do so.

Optimal Finesse: The user can use their dark chi to enhance their finesse to the highest potential.

Dark Chi Magic: The user can utilize their dark chi into the form of magic such as spells and incantations.

Energetic Pressure:The force of the user’s dark chi is capable of damaging their foes.

Dark Element Manipulation: The user can shift their dark chi into various forms of dark and destructive elements

Dark Elemental Aura: User is able to surround themselves in dark elemental forces.

Demonic Empowerment: User’s are able to gain power from demonic forces, allowing them to match the strength of demons.

Flight: Use one’s dark chi in order to fly.

Life-Force Absorption: The user of dark chi can absorb the dark chi of others in order to increase their own strength.

Life-Force Ball Projection: Shape one’s dark chi into the shape of a glowing orb of energy that is capable of mass destruction to large areas.

Life-Force Blast: User can channel their dark chi into the form of destructive blasts.

Life-Force Beam Emission: The user can channel the dark chi and project it in the form of a destructive beam of energy.

Life-Force Infusion: The user can infuse anything (usually a weapon) with their dark chi.

Life-Force Constructs: The user can form their dark chi into powerful energy constructs.

Life-Force Blade Construction: The user can solidify their dark chi and shape it into razor sharp weapons.

Negative Emotion Empowerment: The user becomes stronger when they feed on negative emotions such as despair, anger, or hatred.