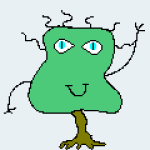 Not much is known about this strange, shambling character of seedy aura, his scar-pocked body and weary weighted speech might make one assume he has seen much in the way of battle. The lone strand of prayer beads hiding beneath his dirty peasants clothing might give away a religious disposition. All that can be gleaned of his past is strictly speculation, though.

In a word, Dirty.

Standing at roughly 5’7, appearing toward the 50’s in age, and swimming in a grayed beard and a bush of unruly silver hair, the Drunkard is the very picture of unkempt. Small scars cover his body, not unlike splashes of paint on a Jackson Pollock painting. He wears loose robes of dirty grays that may have once been white. Smiling gray eyes are bordered by wrinkles that show a history of wide grins.

Always a bottle of wine. Always.

A single strand of prayer beads belonging to some unknown religion.

A bag of gold with a hole in it, carelessly given to him by a demonic boy.