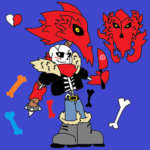 Single, but who would want me?

I was born in a laboratory from my mother who was a demon with my father who was a skeleton, and King Asgore’s royal scientist. My mom had passed away and I lived with just my parents and my brothers, me and my oldest brother sans were my father’s two main lab assistants to help him with his experiments on determination, my other brother PAPYRUS was in high school at the time. We spent so many happy years together until one fateful day my father was working on fixing a few bugs on his greatest invention known to monster kind, the CORE. Me and sans rushed into the center of the CORE to save him but it was too late…  before we could reach him he fell into the machine and was scattered across space and time. Me and sans were the only ones who even remember him, and that’s also how we both became aware of the RESET. Not even PAPYRUS remembered our father, Dr. W.D Gaster.

Look at my profile pic

That everyone can be a good person if they try