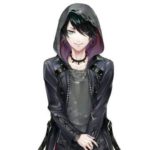 Weapon create: Can make any weapon out of thin air as long as he knows what it is made out of and how it was originally made.

Perfect weapon control: If it can be used as a weapon he knows how to wield it perfectly without the need for training.

Water manipulation: Anything that has water, he can control it to a certain degree. If somebody else is using magic or some sort of other manipulation he may only be able to redirect it slightly.

Kyzer was abandoned as a child and sent to live at an orphanage once his parents realized that he had special abilities. They didn’t know how to teach him to control these powers that he was obtaining so they just sent him away in hopes that they would not have to deal with him anymore. Once he had grown into a young adult he had taught himself how to “mostly” control his powers. Except in rare cases when he gets extremely upset, in which case he loses all control and blacks out. He remembers nothing that he does during this time, unless he happens to wake up in the middle of it happening. He has only woken up once during this time over the years, only to learn that he had killed his biological parents after he searched to find them. A huge argument had broken out between them and he blacked out. When he awoke from this state he saw them both dead at his feet and covered in wounds. Since then he has tried to lock away his emotions and stay away from others. Thus he has dubbed himself an outcast and a monster.

A few daggers. (Don’t ask him the exact number. He can never remember.)