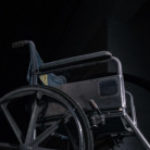 "Take a seat next to me and find out…"

Sighing, the small man admits “You know you’re the first person to even talk to me in a while… so I guess I’ll spill my guts while we’re sitting here. I come from a long line of broken men… my father was an author whose wife left him when I was just a kid. Then, it gets even better! He doesn’t even know who his father was, only that he hit hard and dipped when they were real young. But some of the scars still got to my old man… probably why he blew his brains out when I was walking to get my diploma. Not that he was there for me too often anyways, I didn’t really mind… I spent most of my free time walking around. Sulking… when nobody would even offer a word to me.”
They sipped then on a small flask of liquor they had on them, before putting it in the gray hoodie he was currently adorned in. “I was nineteen when it happened… you were probably wondering when I would get to that. Heheh… well I don’t exactly hate talking about it. Not with you… friend. Fuck this wheel chair… I still walk in my dreams sometimes, and in my nightmares? It’s the chair. The squeak of the old wheels in the one at the hospital still haunts me to this very day. But there he was… hopeful young me. Strolling down the street, hating my life and hoping some sweet person would be waiting around the corner of it. But no… no my luck is just a shitty train wreck, someone was trying to transport manure? And it got caught on some juncture in the rails and goes steam-rolling into a death pile. That was my life when I heard someone whisper, like he was crying out in a horse voice. ‘Help me… somebody!’ And I froze. Naturally assuming the worst when I turned to see some old man laying on the corner past an alley I had passed. Don’t… don’t hate on me too hard for the way I word my words I-I’m trying not to cry here. And I rush over to help the guy, when a big SUV slams me. Straight from behind and the wheels went rolling over my back till all faded to black…”
Lighting a cigarette, the silhouette of his dark mustache and his light whiskered face of dark black hairs is lit. Illuminating blue eyes staring at a tip he pulled on the other end for that quote ‘Life saving’ smoke into their lungs. Sighing it out as he set the lighter back in his pocket
“You know I used to do weight-training in high school? Well now all I can do is pull ups. Every morning is a pull up, every night every waking moment in my bed. I get to reach up, and grab a cold metal bar over my head and drag my sorry ass into that wheel chair. Cause somebody couldn’t hold his liquor… and when he took it out on me and the old man? They never found the guy… he just drove away like it never even happened. I don’t wanna even think about the hospital, again man. That place is sick, I can’t stand the thought of screaming people down a wing or so right next to the old guy trying to die in peace. I just…” They clench his teeth, putting one of his black-painted nail hands up to their head and shaking it. Before relaxing a bit and opening his eyes with another soft draw from his cigarette.
“But I know you won’t make me talk about it,” They nod to the dark corner of his room.
“You never go and hurt my feelings, or judge or stare. Cause you’re no one, and that’s just the waaay I like it.”

Pushing his chair a bit, the left wheel rotated him to the right as he gives it a light nudge forwards. Twisting to his right in a natural leaning motion that he was so used to at this point. Owen had the cigarette held in their mouth which he then dipped over into a sink he saw the frame of in the dark. His apartment was small but it was covered by the disability checks… and he looks at the mirror where he rolled up to it and says “There they are… that son of a bitch,” to the man with the cigarette in the glass.
When he was a younger fellow he actually sort of enjoyed his face. Didn’t mind the way he looked or felt… sometimes. Other times it could be a nightmare, but ever since the accident he’s 90-10 about it. 10 being right now, where he was drunk enough to stand his own reflection. And 90 being the majority of the time where he can’t even look at the silver-shade
They had it low to the floor for him where he sat. The blue frame and arm-rests with the ugly blue seat and silver lining were a stain in his mind. The silver struts in the wheels, the big circle in the center of them where they all went out to meet the rubber. And on the outside of those? Metal handles where his pale slender hands and bony knuckles held them… he was a light fellow. Not bone skinny but definitely not heavy, but their body was covered up in his baggy gray sweatpants and hoodie. His favorite duo for late-night misery, and he says to his reflection after another huff of that good old nic.
“Look at you spaghetti legs… I bet you can’t even wiggle one toe! Don’t worry, me neither. Welcome to the club, but hey! Atleast we exist.” Saying this he then gently pushed back on the left wheel and turned around to its direction. Pulling the right one as well to work himself so they were facing his corner and the bed facing it in the opposing one.
“No offence nobody. I know you don’t care either way but,” They put his hands on their chest to dramatically emphasize, “I’m just not that kindakinda guy. Hahaha.. ah that’s good stuff” they admit to his flask. Knowing full well the small metal container had no intention on replying to the gentleman as he hunched up a little bit. Wincing as he felt his lower back with an anxious rubbing hand under their clothing. And he says,
“Ohh you guys… I just don’t know how much more I can keep lying to people. I like to think it was a car that hit me. Matter of a fact? That’s a pleasant thought at this point.. heh, heha, HA-HA! HAAAHAHAHAA..” Swinging their arms, they start leaning over to his left as he smashes a bunch of empty beer bottles into the floor and rocked back into his wheel chair. Clutching at his face as he already felt it, beginning to crawl its slimy way up their spine. Like chills he couldn’t settle with searing, icy pain the liquor helped subdue. Sharply intaking another breath to let out another sharp burst of laughter before he finally clenched his fists and reeled back in agony. “I just… wish I hadn’t run out crhh-“

Wheelchair
Cigarettes
A small bottle of liquor somewhere always on his person
Flask
Lighters a plenty
And a nice small little apartment (filled with miscellaneous important goodies) in a complex he calls home.
Plus, Secret business =v=

After the Inventory’s assessed
Owen Millings… wrought with pain and anger. Struggles emotionally as he tries not to snap at the base of his sanity while black goo practically coursed through every fiber of his body. They felt it sludging through his veins… into their arteries. Every ounce of it, every piece of it. For in truth when he was out walking one night, they happened to step on some random puddle. And instantly, a creature who had been watching and stalking his usual walking routes every night? Finally set the trap to snare his soul and chain him to its will, he its slave? And they his Master. It began to pool out of his eyes first, and mouth. Giving up as they lean back into his chair and stop struggling, it gushed out of fingernails and out of pores as his entire body began to turn into a pile of dark goo. Their head began to crunch, swelling with mutation and genuine liquid as it morphed him. Black as night with gray streaks mixed in with soft red tints, but its main composition was dark and after laying there in a mess on his wheel chair. Suddenly the mass where his head had once been began to writhe. Squirming upright as his limbs bent and dripped with nauseous amounts of that toxic substance. But it easily stood in his small black frame. The skeleton being a nice outline for its form, and his own color being used as two bright blue eyes split open. Black irises and terrifyingly beautiful cones and lines in the crystal blue color, it was like a wild animal ya know? Beautiful, but very very dangerous obviously; the moment it is unchained it is outraged. It had been so, so long since it was allowed to step out his spine and into his body; so when it stumbled towards the sink it did not hesitate to allow him to feel as his bones were crushed and compiled into a similar inky form for a moment. Allowing the creature to jam its head into the drain of his sink to let him experience the agony, for every living moment it existed? They felt its actions, saw through its eyes heard through its ears. Tasted through their mouth, as within not more than two hours of slow nearly undetectable movement. It’ll find someone… by scent, by sound by luck. It’ll look for one person who is totally alone that night, clearly has no intention in the world for company or people. And it will take them… feed on their body and digest them into juices. A horrible way to die, suddenly smothered and embraced by a powerful inky black creature consuming you. Plus it didn’t stop there, more often than not they were flat underneath of cars. Head on the exhaust pipe speeding down the dark highway as it fed on those toxic gases. Inhaling and expelling huge amounts of black smoke under the car, just making it look like to the perhaps watching eye that someone’s having a bit of car trouble. If they stop? They simply slip away… the creature has never been caught. Never been found, people just up and go missing without a trace. A struggle sometimes, clear breaking and entering. But no body, no one. And Owen just gets to wake up the next morning… butt naked and crawling out of an alleyway looking for help. Luckily, this does not happen all of the time. But it is more than willing to come out when ever it wants/has to. It will not tolerate damage to the host in any manner, bruising breaking of the skin. Any real trauma could trigger a full blown take over, and it’s not afraid at all to come out in the day. Never…

"It only wants to come out at night… I've got that tattooed across my back and I just tell people it's about my dick and they'll laugh. But that's if people talk to me… at all."