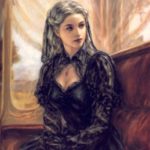 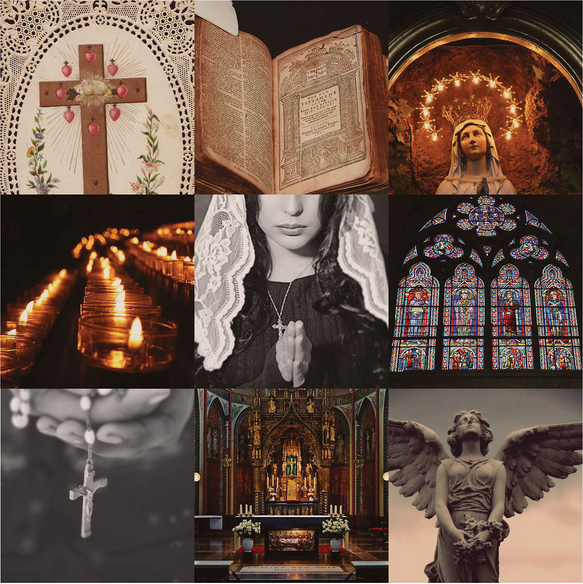 “Have you ever seen a Catholic vampire? Joke’s on you, we’re all Catholic! We literally come from Catholicism.”

Aria was born on April sixteenth, in the year 1496 in Rome, Italy, to human parents Lorenzo and Chiara de Luca. She lived a good life, was very active in the church, and was married at sixteen years old to a man named Giuliano di’Romano. Aria and Giuliano had moved to England in 1513, at the behest of Pope Leo X, and lived at the Court of King Henry VIII. She bore Giuliano five children in the seven and a half years leading to her turn. Giovanni, Francesca, Matteo, Leonardo, and Isabella. All survived, and she watched them grow from afar, after her turn. Aria caught the Sweating Sickness shortly after her twenty fourth birthday in 1520, during her residency in England. A fellow Italian, and friend of Giuliano’s, Alison Corvinus, caught wind of the illness from Giuliano, and made the offer of turning her. He agreed, having known what Alison was for a long time. While Aria was in a deep sleep on the eve of August seventh, the Lady Allie had turned her. Of course, the actual turn took nearly a bloody week, and they almost lost Aria in the process.

Shortly after Aria’s turn, and her “burial”, Giuliano fell ill of the same illness that would have claimed Aria, but he wished to go. He told the both of them not to turn him, and so they didn’t. He died. Shortly after, Alison had shown Aria Hellifyno through a portal she had access to from the cross pendant she wore on her bracelet. The cross pendant is currently in Aria’s possession, having been left to her with Alison’s death, and it is tied around her neck by a black ribbon. She’s never seen without it. Aria has a new home. Meanwhile, Giuliano’s death left their five children orphans. Alison was the sole godparent of the children, and raised them as her own. Aria made sure they were well taken care of and given the means to have and live a good life. She was never directly in their lives, but provided for them the best she could, given her now undead status. While raising the children in England, Alison also had priorities on Hellifyno, some of which ultimately claimed her life. With the children having flown the nest by the time Alison was killed, it made things easier for Aria. Her children were well off on their own, with families of their own.

Aria had finally said goodbye to her children, her husband, and her dear friend, leaving for Rome from England for good. She lives in Florence, now. Occasionally she’ll make her way back, but she hasn’t been to Hellifyno in nearly a decade. She hasn’t been to the manor where she stayed until Allie’s death in nearly a decade. Perhaps it’s time to take a trip back to the manor. Little does she know that the world she knew has long since changed, and in many ways, not for the better.

No Godmodding. Please, for the love of Christ, do not godmod.

No NSFW. If our characters wind up in a relationship, I do not roleplay anything NSFW. It’s just me, y’all. I cannot do it.

No text talk. I am a literate roleplayer. Please do not write like you’re an uncultured being.

Communicate. Please alert me if you wish to change something or do not like something and we can stop. Right there.

No drama. OOC is fine, but please leave drama out of it. I have enough things to deal with such as school, work, and a house full of nine people. Your drama is the least of my worries.

Details matter. I get that you may not be a para-writer, but if you leave me a one-liner, I will not likely respond. I find one-liners lazy and a waste of time.

Have fun. I look forward to writing with you.

If I add, I will start, but I will inform you if I need you to, and vice versa.

Aria exists in two universes. On Earth and Hellifyno. No more and no less.

Aria has dark brown hair that falls in curls to the middle of her back and piercing blue eyes. She stands at a whopping 5 foot 4 inches tall (163 m), weighs 125.6 pounds (57 kg), and has an hourglass figure.

Well if I told you, they would not be secrets any longer, would they?