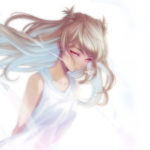 I am an retired army soldier, I'm 25, I love anime, books, sitting in trees, and vanilla bean ice cream! I am also a bit of a psycho but we ain't gonna talk about that.. I am a vampire wolf mix breed, I can be very rude and sassy at times. I have a positive side to me as Well though!

I'm into Males, but it is rare occasion where I will like females. My interest is usually in vampires or wolves.

I loved a normal life up until the age of five.At the age of five, my parents were killed in a car crash. I was in the car but was only slightly damaged. I had been in multiple foster homes, orphanages, adoptive families, ect. I was a relatively good kid though, I got good grades, good friends, and much more.I realized I was a psycho at the age of fifteen when I went hunting with my adoptive parents. I killed almost everything I saw roam that forest and enjoyed doing it. I ended up joining the army a few years later when I was 22, I dropped out about two years later when realizing that I was a vampire/ wolf mix breed. I was searching through my parent’s things when I found a dagger, but it wasn’t normal. It had many abilities that I didn’t know about until a couple months back. I had grown fond of the dagger and it would never leave my sight. I am learning to fly a bit better than before.

I always carry food, water, items like that. I carry around a change of clothes, One gun or so, my dagger, and bandages.

I murdered my foster parents, and my siblings as well. I have a terrible drinking problem when I’m alone.