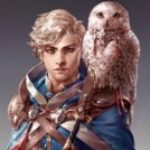 active 2 years, 1 month ago
@mirabar Thank you for accepting me, potential new friend and alley. I’m a bit new to the workings of this site, so do forgive me if I seem…To be sticking out like a sore thumb in any kind of way. Slowly I’m trying to become more familiar with the website. But I do look forward to engaging in a possible adventure with you, should you ever be […] View

I am but a simple hunter from a small village in the snowy mountains. I am compassionate, virtuous, and possess unwavering determination. But I am also stern; for I understand the stakes at hand.

I have a preferable taste in women.

Five hundred years ago, a great entity caused chaos and fear to sweep across the land. It was an ancient force that had existed since the ancient past, a force that had clashed with a previous, but ultimately defeated its opponent and resumed its path of wickedness. It was subdued about one hundred years of a long rampage that nearly wiped out humanity, until four brave adventurers which history has almost no record of their background or even proof of their existence, confronted it in deserted plains after reaching an end of their long quest.

These four adventurers fought the entity valiantly, each receiving blow for blow, such powerful and worthy adversaries they were to one another. And it was a battle that was the longest any of them fought, save for perhaps the entity. But ultimately this battle came to an end and proved that even Man was capable of matching the power of a tainted god with a little bit of effort, and the overwhelming power of friendship.

The entity was defeated.

Many years later after the time of the four warriors had passed, two hunters who dwelt in the snow-covered mountain village of Pairiskia gave life to a healthy babe.

He was given his own guardian pet, which was an owl, at the age of four. And it was at that very age that the boy whom they had named Léohael, was informed by his father’s oldest friend that it had been foreseen by the Seer, Mildryth that he was destined to confront the entity who had been fought five hundred years ago by the courageous four adventurers of the past.
For it was revealed to him that his father was indeed part of the bloodline of one of those four adventurers. And those who were of such bloodline were fated to fight the fight of their ancestors.

Léohael had his own doubts about being able to overcome such a powerful force on his own. He knew that he, as a mere human, was no match for something so mighty on his own. So he decided to seek out friends and allies to fight beside him.

Arming himself with his sword and other weapons, and aided by his loyal guardian companion Tylluan the owl, Léohael left the comforts of his white-tipped mountain village and journeyed forth into new territory he had never once stepped foot into himself.

Short blonde hair that is slightly swept to the side and blue eyes and pale-white skin. He has handsome features and wears an outfit befitting of the culture of which he has stemmed from. His outfit is a blue coat covered in brown leather belts with silver owl crests on his breasts, and bearing a tall neck with gold accents at the sides and a strap holding it together in the middle of the lower neck. His coat also has a matching cape which falls over his shoulders and elbows and runs down past his back. There’s also a gold trim that goes down a set of buttons. Guards created out of finely crafted leather rest upon his shoulders and at the hands, he wears a pair of purple gloves trimmed in gold.

I came prepared with a bit of equipment. My arsenal consists of a sword which belonged to my father, as well as a bow which was crafted by the hands of an Elven warrior along with finely crafted Elven arrows. Aside from this, I carry a pouch in my pocket with gold for my journey. And lastly, I also have my hunting knife tucked away in my right boot.

That despite the face of bravery I have worn since leaving my humble village, I do have my fair share of fears also. I have an irrational fear of spiders and snakes.

That a selfish ambition will be the destruction of this world soon enough.