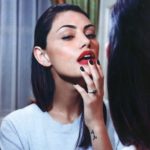 ***This character has been retired. But, has the potential to be mentioned, and because so, the profile will remain up.***

Levice, and her brother Auxilio, after ascending to God-ship, created their own world, their own dimension, and never looked back to Hellifyno.

Mother to Adeline, a Seer, Queen of New Avrillis, and Goddess of the Undead.

Death, the dead, the undead, dark places, and quiet places…

Pawn. Victim. Dead. Reborn. Soulless. Queen. Survivor. Goddess.
————————————————–
Pronunciation: Lauh-Veet-Say. Uh-Less-Uh. Car-Ter
Nickname(s): Levi (Leh-Vee), Vice, Violet, or Lessa;
Alignment: This… Is under heavy review.
Education: Obtained a GED at 15, went to College, obtained a Bachelors; majoring in business and minoring in finance and accounting.
Language(s):  Slovak, Russian, Latin, Italian, Greek, and English.
Vice(s)/Talent(s): Drugs, Liquor, and Adrenaline. Sings and plays the piano and guitar.
Habit(s): Zones out a lot, looks utterly uncomfortable most days.
Appetite: Drinks the blood of the recently deceased for entertainment, but truly prefers to eat their flesh and organs; eating or drinking from a fresh kill will cause her to be out of her mind for a while, it’s a poison to her and her abilities.
Abilities/Power(s): Zombie; Lacks immortal speed but, has the immortal strength and heightened senses. Witch; Adept level with Expression and Necromancy. Seer; Visions granted by the three fates of the past, immediate future, and distant future. The immediate future is more factual, likely to happen or in the process of happening. The distant future is ever changing and less solid, sometimes she will receive three possible outcomes. She can also act as a medium between the world of the living and dead, also is a skilled fortune teller, and for many reasons avoids these acts like the plague… But everyone has a price…
————————————————–
.:Family:.
————————————————–
Parents:
Leila Marie Carter;
Drakos Dragule;
Grandparents:
Diana Marianus.
Children:
Adeline Carter
Caspian Carter
Lazarus Carter
Noemi Carter
Aunts & Uncles:
Amelie Zagurian;
;
;
Ganaka Dragule;
Danteus Dragule.
Siblings:
Lucian D. Kishimoto;
Auxilio Phoenix-Carter;
;
Arielle Rodd;
;

in the acceptance of ones' own power.