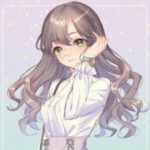 Lícia, the Bringer of Light. Or, that is at least what she once was. She is now,

Lícia-Marie, the daughter of the Supreme Deity. She had existed since when time first began. She was born and raised to banish, and chase away the darkness. When doing her job, she does her best to spare as much as possible. Unlike her peers, she does not hold hate for any of the races. Not even the demons.

Lícia most times spends her time on Hellifyno now, studying and watching the beings. She never sees anything like them in Heaven, but only for brief moments in her job when she’s helping to banish evil and darkness when she is taking a job from humans. They have always caught her eye with their unique ways and so, she secretly goes to Hellifyno with her free time and work to watch.

Recently, Lícia has become one of the Fallen due to being entangled stuck with human problems, which led to a sin. Lícia has been abandoned by most of her angelic friends and even her mother, the Supreme Deity. She lives on Hellifyno now, living her life reluctantly.

Lícia has light brown hair that extends to her back. She also had honeysuckle hues and stands at 5’2. Lícia is always seen wearing her casual attire (as shown below), only seen on Hellifyno at least. She is rarely seen in her more formal, goddess attire (as shown below) but when ever she is seen in it, it indicates she is involved with business.

[Usual Attire, But on her back are puff sized wings (like the size of a clenched hand). Her wings in this form are puffy and fluffy, white feathers but her hair usually covers them]

She keeps her title a secret. She wishes to be with all and treated equally