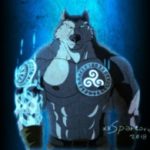 The half brother of Thor

Baldur was an Aesir born to Odin and Freya and was the half-brother of Thor and Týr. At some point in his life, his mother learned from the runes that he would die a “needless death”. Determined to prevent his death at any cost, Freya placed a spell on him that made him invulnerable to all threats, physical or magical. The spell had one weakness, however: mistletoe. To make sure no one figured out the spell’s weakness, she also cursed Mimir to prevent him from speaking about it. However, the spell had a side-effect of removing Baldur’s ability to physically feel anything. He could no longer feel anything from pain and pleasure to even the temperature of wherever he stood. Baldur’s pleas to Freya to lift the spell fell on deaf ears, and Freya insisted that Baldur would thank her for it. An outraged Baldur was consumed with hatred for his mother and initially attempted to kill her. With the faintest amount of love for his mother still left, he let her live, citing that he never wanted to see her again. After abandoning his mother, he spent 100 years at Asgard raising with his father, Odin, his brother, Thor and nephews, Magni and Modi, only to consider that his entire family were “fucked up”. Years of being under his mothers’ spell soon took it’s toll on Baldur, and he was driven to insanity due to his sensory incababilitites. As such, he soon became driven by resentment for his mother and wished nothing more than to kill her for the decades of suffering she has inadvertedly caused him, later coming to regret sparing her life.
God of War (2018)
Baldur answers to Odin’s call to hunt down the Jötunn Guardian, one of the two remaining Jötnar in Midgard who had been foiling the Aesir’s plans for some time. With the sudden disappearance of the protection spell of the Wildwoods, Baldur decided to investigate, eventually finding the cabin where the Guardian lived.

Mistaking the Guardian’s husband, the Greek God Kratos, for the actual Guardian, Baldur confronts the God, who in turn thought Baldur knew of his past as the “Ghost of Sparta”. Unbeknownst to Baldur, the Guardian had died mere days before and had been cremated minutes prior to his arrival. Kratos is at first unwilling to fight, even though Baldur continuously taunts and punches him, but eventually gives in and punches Baldur to the ground. When Kratos tries to tell him to leave, Baldur punches Kratos clear over the house. Breaking a hole in the roof, Baldur spotted two beds inside and demanded to know who he was hiding. The two start to brutally fight and Kratos is able to overpower Baldur, but the latter seems unaffected by any damage taken, with Baldur subsequently revealing that he doesn’t feel pain. Kratos seemingly kills Baldur by snapping his neck and pushes Baldur off himself, causing him to tumble off the cliff edge that’s beside them.

Due to Freya’s spell, he was simply incapacitated by Kratos’ attack. Gathering his nephews, Magni and Modi, they visited the imprisoned ambassador of the Aesir, Mimir, assuming he knows where “the tattooed man” and “the child” are. However, their interrogation is fruitless, as Mimir doesn’t know who the two are and refuses to help the Aesir, pointing out that Baldur’s offer to convince Odin to free Mimir would be useless, as are death threats since Odin won’t allow anyone to harm the prisoner. Baldur leaves with his nephews in tow when Mimir demands that he take the “worthless wankers” with him.

Later, when Kratos, Mimir, and Atreus prepare to go to Jötunheim, Baldur ambushes them, gaining the upper hand against Kratos and goading Atreus into attacking him. He dismisses Kratos as “just meat” and assumes Atreus was the mastermind behind the Guardian’s attacks on the Aesir. Atreus tries to fight Baldur, feeling that he is ready for the confrontation. Kratos tries to stop him, only to be shot with an arrow by Atreus. Baldur grows amused upon seeing Atreus strike at his father when he attempted to keep him out of the fight, stating “and I thought my family was fucked up.” An overconfident Atreus attacks Baldur but fails to kill him, and he knocks the boy unconscious before departing on a dragon. Kratos jumps off the mountain, intercepts them and fights Baldur, who eventually makes it to the realm travel room and locks in Asgard as the destination, hoping to bring the full weight of the Aesir down upon Kratos. After another brutal fist fight, Kratos alters the destination to Helheim, sending them flying into the Realm of the Dead. Baldur comes across an illusion taking the form of his memories, specifically the time he confronted his mother, Freya, over the spell she placed on him. However, when he spared his mother, he called his vision self a coward. Baldur angrily lashes out at his mother and tearfully called himself a coward, despite her reasons and motives. Kratos, Atreus, and Mimir, in hiding, witness Baldur act irrationally towards the illusion and learn of his connection to Freya.

After finding a way to escape Helheim, Baldur learns of the trio’s journey into The World Serpent’s stomach and fights the giant serpent in order to make it expel the three next to the colossal corpse of the Frost Giant Thamur. Emerging from the icy waters of the lake, Baldur meets his mother for the first time in years. Despite his time away, Baldur is still consumed by hatred towards his mother. He tries to attack her but Kratos gets in his way, leading to another fight between them while Freya tries to intervene by entangling the two with roots, but her spells are ineffective as they continue to fight.

During a small lull in the fight, Kratos is ensnared by vines conjured by Freya, but Baldur, witnessing Kratos’ plight, manages to avoid another conjuration of vines meant for him. Fixed on killing Kratos, Baldur approaches him, but Atreus places himself in Baldur’s path. Irritated, Baldur strikes the boy square in the chest. Kratos is horrified, believing that Atreus is wounded, but he tells him that it isn’t his blood; in fact, it is Baldur’s blood. It is shown that Baldur’s hand was pierced by the mistletoe arrow that Kratos had strung onto Atreus’ quiver after the strap was broken during their journey. Baldur then revels in his newfound senses as a horrified Freya watches on.

Being vulnerable once again, Baldur resumes his battle with Kratos. He thanks the pair for their assistance, claiming that not even Odin himself was able to remove his “curse”. Enraged, Kratos overwhelms Baldur and he and Atreus brutally beat the Aesir god, but Freya intervenes again by manipulating Thamur’s corpse, who attacks Kratos and Atreus with his icy breath. Freya’s efforts end in failure as Atreus calls the World Serpent to attack the reanimated Giant. An utterly defeated Baldur goads Kratos to kill him, but after some convincing from Atreus and Freya, Kratos spares him and warns him not to come after them again nor lay a hand on Freya.