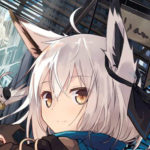 I'm the daughter of Tori Kaslana, who you probably all know… That's a good "I know her", right?

Uh, none, right now. My sister, Rose, keeps pestering me though.

Juuuust another wolfgril in training to become badass!

An Aclan steel sword, made by herself, when she was initially learning to make her own weapons. Aclan is equivalent to Stainless Steel.

Her infamous Air Whisper sword, which is the one she commonly wields, aside the unnamed Aclan sword. It was named by some of her enemies, who said it “whispered like air”, and was completely unpredictable and unstoppable. She created this sword with assistance of her mother.

Last, but not least, the unnamed blade her mother gave her. A very beautiful sword, made with an unknown metal to Alicia, it seems to slice easily, and due to her training, is nigh weightless, despite being weighed in at about ~11 pounds.

That I will eventually be a good fighter!