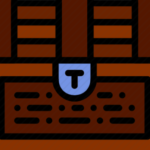 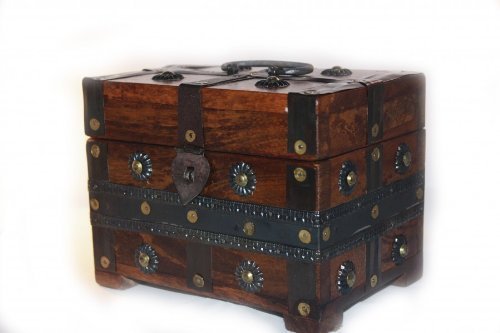 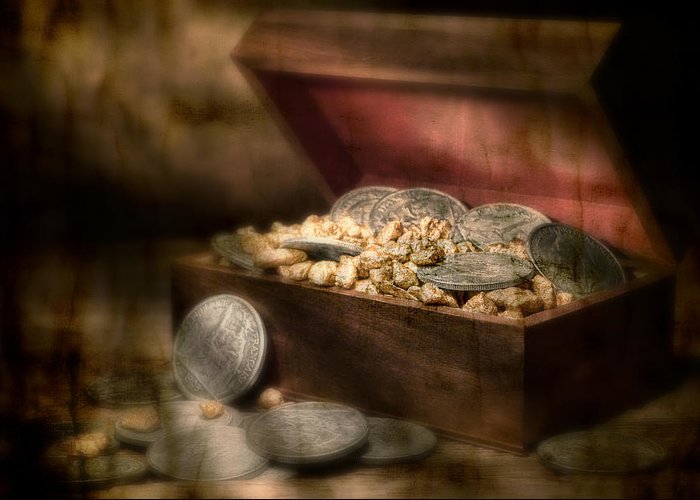 And here it is with some treasure!
Name: Minic  Species: House Mimic (Lesser) Sex: N/A

Minic came to be as, centuries ago, an Enchanter magus developed a spell to infuse animal properties into inanimate objects and make them alive. in a sense, anyway – most of the creations were dumb as rocks, if not completely braindead simply because they lacked a brain to think and learn with. Minic is one of the magus’s latest creations, the results of an experiment shortly before he was arrested for the unsanctioned development of forbidden magic. Most creations were destroyed that day but Minic and some of its chesty comrades escaped by a stroke of luck, which led to the later appearance of Mimics in dungeons all over the world.

Minic is, as its name implies, a Mimic monster – imitating chests full of desirable loot, they draw careless adventurers to their doom by chomping them. Normally, anyway – Minic is not the kind to do that. Being too small, matching that of a jewelry strongbox, it instead resorts to eating plants and the occasional small animal.

Minic’s typical appearance is that of an unseeming wooden strongbox, complete with leather decorations and a keyhole on the front, which is where its eye is located. Its lid forms its jaws, as such there are several short and pointed teeth on the top and bottom of it.

(Note: Minic can use Storage Space to store anything as big as one cubic meter or smaller in a separate dimension, like a bag of holding. As such it can carry around a lot more than its small appearance would suggest.)

-A small handful of old coins, worth little to anyone that’s not a collector
-Some shiny pebbles, not really worth anything
-A copy of “Hreidmar’s Simplified Guide to Dwarven Politics, Ed. 2”, handwritten and illustrated
-A copy of “Thordan’s Bestiary of Dungeons and Haunts, Vol. 4”
-Two expired potions of Regeneration
-Two rusted iron daggers
-A brass key
-Several empty glass bottles with colorful labels
-Several handfuls of clear glass shards
-Other bits and bobs of junk that is ‘shiny’ (by reflecting light)

-A small gold figurine, about twice as tall as a chess figure
-A small cut ruby gem

Its Status! That’s something intimate, which it keeps a secret from anyone else!

Mimic: 10
Minic’s level as a Mimic. Raised by earning EXP through combat and general Mimic things. At level 25 it will be able to evolve.

Shapeshift: 4
Shapeshift allows Minic to change its appearance, shape and color. It is not possible to add or remove mass. The user can not heal injuries or change their basic body shape. Higher levels allow for faster and more detailed shapeshifting with less effort.

Allows the user to store excess raw biomass in their body to keep their shape. However the user’s weight is raised proportionally to the amount of biomass they have stored. The dream skill for someone who wants to eat what they like without getting fat! The amount of weight gained is equal to 1/(level) of the skill (so a level 10 Biomass user would only gain 100 grams per kilo of Biomass they store), without regard to the laws of physics and mass conservation. Higher levels raise the total amount of Biomass that can be stored and lower the added weight.

Good Fortune: 4
The Goddess of Fortune looks favorably upon owners of this skill. Good Fortune may trigger randomly at any time, averting bad things or improving good ones, like making an incoming attack miss or making you find a silver piece when you searched for a bronze one. The likelihood depends on how high the user’s LUCK attribute is. Greater levels raise the likelihood % per LUCK point and the magnitude at which Good Fortune influences events.