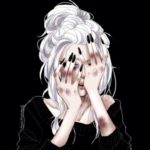 !WARNING! This character is based off the story of someone I cared for deeply. If you do not settle well with any of the following, I suggest you don’t read this story. Thank you! Otherwise, feel free to read. This story includes; Domestic Violence, Self Harm, and Blood. 18+ Language. Also, if anyone wishes to join the family, just leave me a message and we can most likely work something out!

Her hand flew through the air, and struck against skin. The mask was lifted and her sadness is evident. Blood crawls it’s way down her forehead and drops onto the tile from a quivering chin. Another glass bottle was flung towards her.

“We were happy, once, you FUCKING MISTAKE!”

Screams echoed through her ears and hot liquid salt fell from her eyes, as her knees cracked against the floor as she yelled back pleads. Stop. Don’t. Just don’t. Her head was filled and filled with vivid, poisonous thoughts that corrupted her mind.

Screams erupted from her lips, as her fingers slid down to grip her older brothers hand. The other hand clinging to him as her eyes scrunched shut. Ear pressed to his chest as she listened to his quick beats of fear, coming from the beating heart in his chest.

A crash, flames licked up the house as they lay stranded. It’s roars of anger screaming in her ears as she coughed, and tears ran paths down her dirty face. Smoke thickened and then he was gone. His hand being ripped from hers.

“Kyle!” She sobbed and kicked as strong hands with an iron grip pulled her back. The brothers. Thomson and Michael. Their neighbors. Michael ran fingers through the girls hair. Hushing her with shaky, comforting whispers.

The reassurance failed, as her mother ripped herself from Thomsons arm and stormed off. Grabbing Lillian’s wrist and yanking her with her. When they had gotten far enough, she let go and whirled around.

Her fist cracked against the girls cheek. Sending the 13 year old to the ground. “You should’ve watched the fire, you dumb-ass!” Her mothers words hissed towards her, clawed at her flesh and reached her heart. More tears streaked from her eyes. “I-I’m sorry! Mom, I didn’t know the wood had fallen out. I-” She was cut off, and more sobs echoed through the air as her mother sent a booted foot to her ribs.

“Get up and don’t talk back..” Sarah growled, taking her daughters hand into another rough grip and pushed her into a motel..

Lillian has long, white hair and green-blue eyes. Freckles across her cheeks and nose, that curtain down her shoulders, arms and legs occasionally. Bruises and scars dance across her body. New and fresh. A scar is on the left in a rainbow like shape, only one stripe though. Hidden by her hair. Lil is 16 years old now and stands in a rather frail body-shape. She doesn’t eat much. Whether she had the choice or not. She stands at 5’2″.