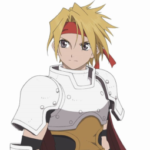 He’s a lonely boy who suffers severe PTSD from past trauma.

Lucas was always a challenged boy, he would need constant pampering from his mother Hinawa and would be bullied by all the other children of Tazmily.  However, Lucas had no idea that he would rise to become the star that would light the path through dark times eventually.  On one fateful day, he was up in the mountains with his mother visiting his grandfather Alec.  After finishing lunch, they left to return home but a group of strange peddlers wearing pig-shaped helmets interfered.  The peddlers had been modifying animals into hideous half robot abominations.  One of their most deadly creations the Mecha-Drago, a combination of a Drago and extreme hate causing the run in with the Mecha-Drago to result in Hinawa’s death.  Time passed by as Lucas suffered from 3 whole years of depression and shutting himself inside the house.  After these 3 whole years Lucas had overgrown his child-like behavior and set off to explore the now “Mechanized Tazmily”.

Lucas has blonde hair with a “swoop up in the front”.  He wears a yellow T-shirt with red stripes, blue shorts, white socks and orange and yellow sneakers.

In his “Awesome Form”  Lucas wears the same thing but covers his back with a red cape with golden outlining, a king’s crown bursting with shining light, a golden ring with a ruby at the center and he wields a Golden Scepter.

Mystical Stick: A mystical scepter that is only passed down to those with the Purest hearts

Anyone can be forgiven