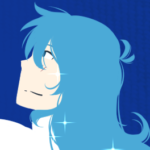 Luna looks like she’s a child. Officially she says she’s 12, but is quick to say she is much older. In reality, Luna is roughly 4,000 years old, being stuck with eternal life and eternal youth. Uncertain of how this curse was afflicted upon her, she believes it to be punishment for her sins, even as a child from an insignificant farming town in feudal Japan.

Her main ability is the ability to see the future – people have their personal timelines, bound to certain things by “threads of fate” – and Luna can see that. She usually chooses not to, though. It’s a lot of work to process a lifetime’s worth of events that have yet to unfold. And on top of that, changing someone’s future is practically impossible, even with the knowledge. So Luna does nothing.

Not so unusually, Luna isn’t a native to this universe. On request of her dear friend Rye, capable of interdimensional travel, she’s sent to this one to investigate…  this universe’s version of Rye Simmons. It’s going real bad. Especially when she’s a typical dumb blonde…

Right now, her knowledge of Hellifyno is poor, but there’s a lot of room to improve. It just feels like a constant uphill battle, now combined with culture shock that she is far from the eldest anymore and that most patrons of the Inn are not impressed by her abilities.

As for more technical info on her powers, Luna does not see one’s future unless she turns the divination ability on. The person needs to be within eye sight for her to divine their future, and she can see how tightly bound by fate they are – fate sometimes brings together people, items, or events regardless of what happens in between, and she can see that.

Her second time related ability is to freeze time. Do the words “Za Warudo” mean anything to you? They probably don’t. Luna is capable of freezing time from her own perspective – to others not caught up in the effect, absolutely no time elapses from activation to end. Luna is mostly only capable of freezing time for up to four seconds at a time, as any longer would be exhausting, but also chaining a lot of these bursts still drains her greatly and she tries to use it sparingly or in even shorter intervals. Mostly, Luna uses it to move around freely. She can take things with her and as long as she touches an object or person with her hand, they will follow her in frozen time, but once she lets go they leave the effect even if she still has it activated. Luna can’t change things that are already frozen and has to start time again in order to interact with them.

Although despite all this, it just looks like she’s teleporting when she uses this power. And she just tells people that’s what it is if they ask.

That’s all for now – I tried not to write an essay lmao. If you want to RP, feel free to catch me in PMs or in comments. I only ask that I’m not interested in explicitly romantic RPs and would prefer if you did not approach me with that as your goal. Other than that, pretty open to a lot, so feel free to hit me up!

Something not unlike a human.

A dear friend called in a favor to investigate some strangeness of this planet Hellifyno. It’s going poorly.A long time ago, I might have been a normal human being, but as of these days, I do not age or die. I’m not sure what curse I was afflicted with, but it has been 4,000 years. I have been a child for as long as I can remember. A cure for this… thing… would be nice.