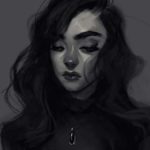 Males. “A certain man has grasped my attention.. Whether he thinks himself monster or not.“

My love belongs with Noctis Bloodmoon.

Kilani was always a quiet girl. Silent. Kept to herself. This caused her to be an easy tease for her family. Tease, More or so.. Abuse?

So, Her family was known for it’s power and being of the race of vampires. Magic, Of which they wielded tended to be very strong. They had this..”Special Training,” But Kilani’s was always more hard-core. This being because, She didn’t talk about what her power was. The family she had, Always had the three power’s that was mostly wielded by the member’s of it. Blood Magic, Voodoo, And Telekinesis.

But Kilani had something.. Different. She had two things actually, She was a summoner and a illusionist. Is that what you call people with Illusion magic? I dunno, Don’t really care either.. Ahem.. Anyways!

They thought she was a “Dud,” Either she would never have magic, Or would get it really early on. They thought this because, She never used her magic around them. Ever. Being because, She knew they would make a fuss over her and make her be heir to the throne of their city, Vilagonial. Make her attend all the Games Of BloodLines. And so on. So, Basically, She got beat bad when training came along.

Eventually, She just ran away.

She has long, Extremely wavy black hair. Her eye’s are a strangely, almost glowing like, Amber hue. She stands at 5’5 and has a pale skin-tone.

Whatever she has on her.